Mother Teresa Has Been Declared A Saint 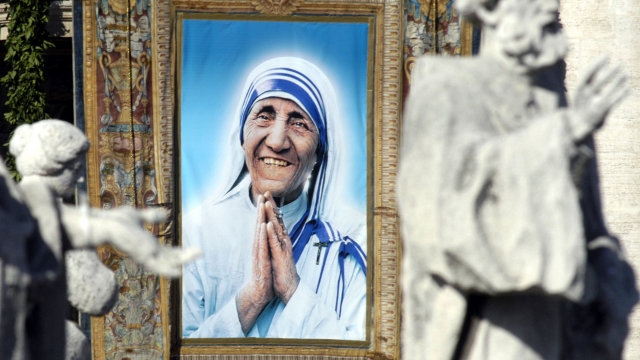 SMS
Mother Teresa Has Been Declared A Saint
By Lindsey Pulse
By Lindsey Pulse
September 4, 2016
The late Roman Catholic nun died in 1997. Pope John Paul II accelerated her canonization process, and now, she has been declared a saint.
SHOW TRANSCRIPT

Mother Teresa is a saint. No, really. The Pope just granted her sainthood.

In a Mass held at the Vatican on Sunday morning, Pope Francis canonized the late nun for the philanthropic work she did throughout her life.

Mother Teresa, who died almost two decades ago, spent most of her life helping the poor in India.

The Roman Catholic nun has long been called Saint of the Gutters, so the canonization just validates how many already felt about the her.

Throughout the course of her life, she received a Nobel Peace Prize, an honorary degree from the University of Cambridge and the Presidential Medal of Freedom.

The Catholic Church has also credited Mother Teresa with performing two miracles after her death in 1997. In most cases, two miracles are required to become a saint.

The church says one of the miracles healed the abdominal tumor of woman in India. The other reportedly healed multiple brain tumors in a man after his family prayed to Mother Teresa.

SEE MORE: A New Commission Could Allow Female Deacons In The Catholic Church

But despite those miracles, some believe her sainthood isn't deserved.

The late Christopher Hitchens, who is known for his writings against the church, claimed Mother Teresa took dirty money that mysteriously disappeared.

And the head of a Hindu nationalist organization said the nun had ulterior motives in performing her charity work by aiming to convert those served to Christianity.

Mother Teresa is the third saint to be canonized by Pope Francis this year.