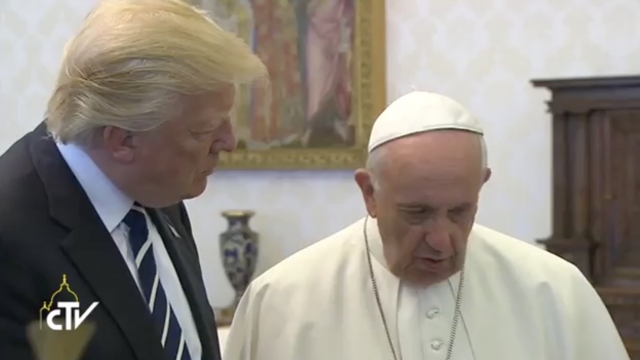 SMS
Pope Francis Extends An Olive Branch To Donald Trump — Literally
By Briana Koeneman
By Briana Koeneman
May 24, 2017
During their first face-to-face meeting, Francis presented Trump with a medal inscribed with an olive tree as a symbol of peace.
SHOW TRANSCRIPT

"This features an olive tree, which is a symbol of the peace," Pope Francis' translator said.

"We can use this. We can use peace," Trump replied.

After the two spoke for a while in a private room, Francis and Trump exchanged gifts.

Trump presented the pope with a custom-bound case of books by Martin Luther King Jr. 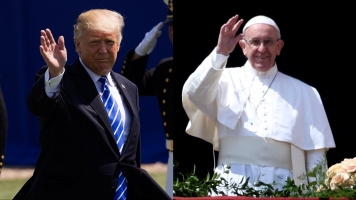 Why Trump And The Pope's First Meeting Really Matters

And in return, Francis gave Trump a medal inscribed with an olive tree. The tree's branches are well-known as a symbol of peace.

By all accounts, it was a very cordial meeting between the two leaders, who have had a somewhat tumultuous past.

During last year's presidential campaign, the pope criticized Trump's pledge to build a wall on the border between the U.S. and Mexico.

Trump responded by calling Francis "disgraceful" for questioning his faith.

These days, they have at least one thing in common: Both have called on Muslim leaders to take a stand against violent extremism in their communities.