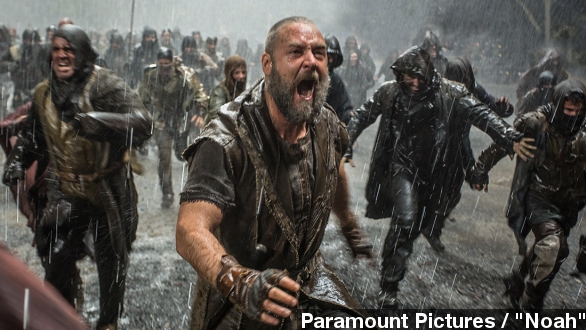 It could have been the most bizarre photo op in some time, but sadly it was not meant to be. The Vatican reportedly canceled a meeting between Pope Francis and "Noah" star Russell Crowe over publicity concerns.

Variety reports the Vatican had tentatively scheduled a meeting between the pontiff and the creative team behind the film "Noah" for Mar. 25. ​​"The reason the Vatican cancelled it, according to a source, is over concerns word would leak, causing a spectacle as Crowe and [director Darren] Aronofsky landed in Rome."

"Noah" is a $125-million adaptation of the Biblical account of Noah. The film stars Crowe and Emma Watson. The movie has drawn some Christian criticism for its loose treatment of the source material.

A photo op with the Pope would have been a golden opportunity for some good religious press, and the film's main star had already attempted to make it happen.

Last month, Russell Crowe sent a series of tweets to Pope Francis' Twitter account, @pontifex, asking His Holiness to host a screening of the movie in the Vatican. He later apologized to the Pope for "causing havoc in your social media world", whatever that means.

But the Pope's endorsement has always been a long shot for "Noah." As The Hollywood Reporter notes, while Francis has admitted an enjoyment of some Italian film classics, a Vatican spokesman said, typically, "The pope does not watch films."

Still, Pope Francis has shown some interest in films with religious themes. Last month he met with Philomena Lee, the inspiration for the Oscar-nominated film "Philomena," which criticizes the Church's former treatment of children born out of wedlock. (Via ABC)