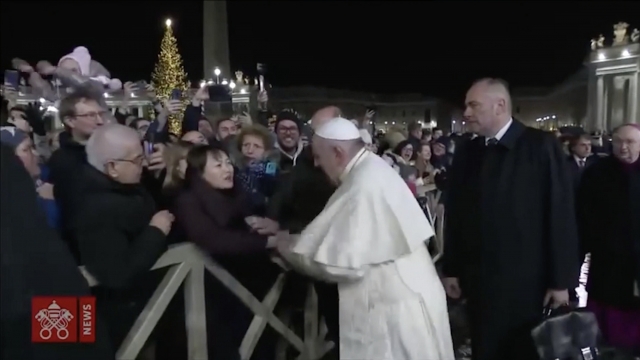 On Wednesday, Pope Francis apologized to a woman for his interaction with her on New Year's Eve.

This video, which has spread throughout the internet, shows Pope Francis greeting a crowd in St. Peter's Square. He takes several worshipers' hands. But as he turns to walk away, a woman reaches for him. She grabs his hand and pulls him toward her, and he seems to stumble. The pope tries pulling away, but she keeps tugging, and that's when he slaps her hand. Pope Francis appears upset as he finally walks away.

A statement from the Vatican says the woman pulling on the pope's arm caused "a shooting pain," which is why he "reacted with an impatient gesture to free himself from her grip."

During his New Year's Day address, Pope Francis publicly apologized. He said: "Love makes us patient. At times we lose our patience — me too. And I am sorry for the bad example I gave yesterday."

He went on to condemn violence against women, saying, "Every form of violence inflicted upon a woman is a blasphemy against God, who was born of a woman."