Pope Francis Explains Why He Didn't Say 'Rohingya' In Myanmar 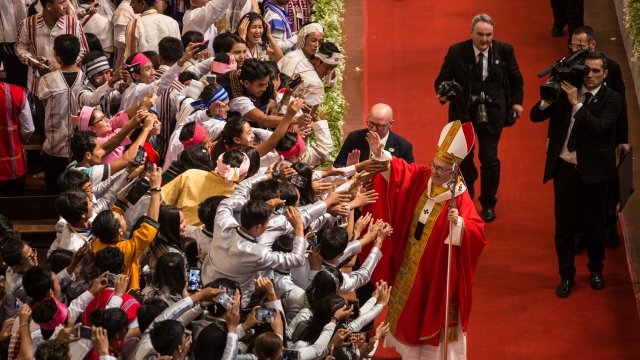 Pope Francis says if he'd said the divisive term in public, he'd have been shut out of private dialogue with Myanmar's leaders.

Many human rights advocates had hoped Pope Francis would say "Rohingya" while visiting Myanmar late last week, but he didn't. And on Saturday, he explained why.

A quick background: Myanmar is a predominantly Buddhist nation, and its military is accused of waging an "ethnic cleansing" campaign against the Rohingya — a stateless, mostly Muslim minority.

"Rohingya" is an extremely divisive term in Myanmar — the government doesn't even recognize it. Experts said if Francis publicly said the word, he'd be taking a clear stance on the issue.

But he told reporters Saturday if he'd said "Rohingya" in public, he would have been shut out of private talks on the issue with Myanmar's leaders.

Since August, over 600,000 Rohingya people have fled violence in Myanmar to neighboring Bangladesh.

He also claimed his private conversations were more straightforward than his public speeches. He said his talk with the commander in chief of Myanmar's military was much more direct and that the general understood his message.

However, the general publicly claimed after his meeting with the pope that no religious or ethnic discrimination exists in Myanmar.