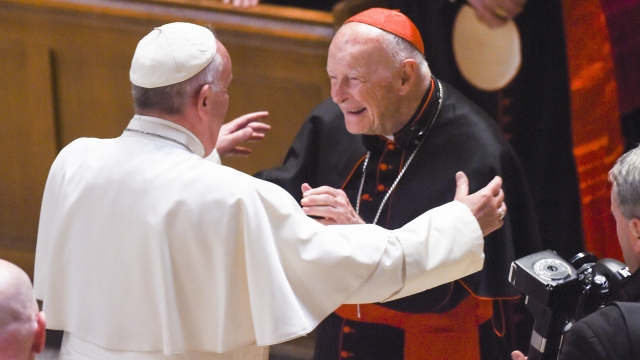 Pope Francis defrocked ex-Cardinal Theodore McCarrick on Friday. As Newsy has previously reported, McCarrick was removed from public ministry last year after an investigation found credible allegations he had sexually abused a teenager decades ago when he was a priest in New York.

After the allegations were made public, more men came forward with accusations of sexual misconduct. One man told The New York Times that McCarrick started sexually abusing him when he was 11 and the abusive relationship lasted almost 20 years. The Times also revealed that the church had known about some allegations for years, but secretly paid settlements to the accusers.

A Vatican statement said the decision is final. The Pope's dismissal means 88-year old McCarrick is no longer a priest and the church won't provide for him. Catholic News Agency says McCarrick reportedly never drew a salary from the three dioceses he led anyway, and that he has "a private income from savings and monthly annuities."

It isn't uncommon for a priest to be dismissed on sexual abuse claims, but this sets a precedent for disciplining bishops. A professor specializing in Catholic law told The New York Times, “Bishops and former cardinals are no longer immune to punishment. The reverence that was shown in the past to bishops no longer applies.”

The decision comes a week before top Catholic officials will meet about the ongoing sexual abuse accusations in the Catholic church. The Pope called the meeting last September, and was criticized by sexual abuse survivors for choosing a date five months in the future rather than sooner.