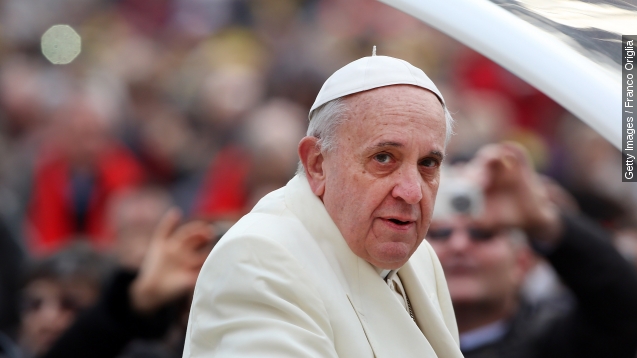 SMS
Pope Calls For Disarmament 70 Years After Nagasaki Bombing
By Evan Thomas
By Evan Thomas
August 9, 2015
Pope Francis spoke Sunday about the legacy of the bombings of Hiroshima and Nagasaki and called for progress toward a nuclear-free world.
SHOW TRANSCRIPT

On the 70-year anniversary of the bombing of Nagasaki, Pope Francis spoke about the risks of nuclear weapons. (Video via the U.S. Department of Defense)

"This (event) has become the symbol of mankind's enormous destructive power when it makes a distorted use of scientific and technical progress," the pope said.

The comments continue the Vatican's campaign against nuclear weapons.

Francis called for global disarmament in December in a letter to the 2014 Vienna Conference on the Humanitarian Impact of Nuclear Weapons.

And The Vatican publicly opposes Iran's nuclear program. Francis had hoped preventing a nuclear Iran would be conclusive progress "toward a more secure and fraternal world." (Video via The Vatican)

Negotiators have since reached a deal that restricts Iran's capability to enrich nuclear fuel for the next 15 years. (Video via C-SPAN)

The Vatican urges stakeholders not to stop with initial progress: "Continued efforts and commitment on the part of all involved will be necessary in order for [the agreement] to bear fruit."