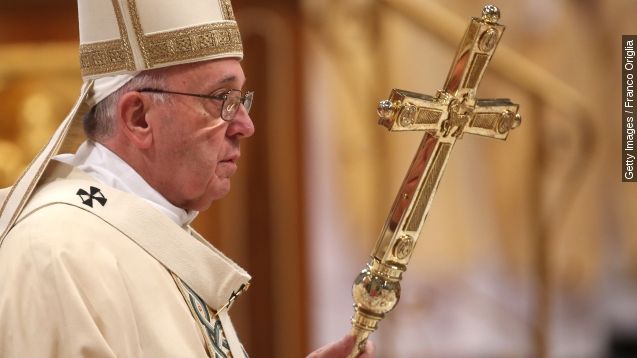 SMS
Pope Baptizes 26 Babies In Celebration Of Jesus' Baptism
By Melissa Prax
By Melissa Prax
January 10, 2016
Sunday marked the Feast of the Baptism of Our Lord for the Catholic Church. Pope Francis celebrated by baptizing 26 infants.
SHOW TRANSCRIPT

The Feast of the Baptism of Our Lord is a tradition for Catholics worldwide, occurring the Sunday after Epiphany. The pope's celebration took place at the Sistine Chapel. (Video via CNN)

While the Catholic Church doesn't have an age limit for baptizing, typically infants raised in Catholic homes are baptized and dedicated shortly after birth.

The pope encouraged parents to raise the newly baptized infants Catholic and told mothers to nurse when needed during Mass.

This video includes an image from Getty Images and Davezelenka / CC BY SA 3.0.