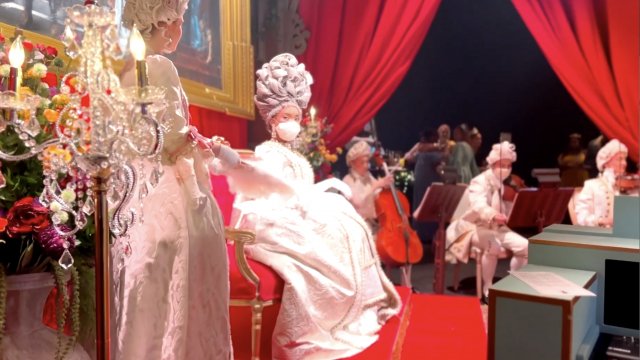 SMS
Pop-Ups Are The New Pop Culture Phenomenon
By Casey Mendoza
By Casey Mendoza
April 26, 2022
The "Bridgerton" Experience is popping up across the country, raking in millions of dollars and ramping up hype for studios and their shows.

Adapted by executive producer Shonda Rhimes, "Bridgerton" tells the love stories of a high-society family in Regency-era England. And the "Bridgerton" Experience — with its live performances and props from series displayed around the venue — aims to re-create the Netflix show's world.  The event is happening for the next couple weeks in Chicago, Los Angeles, D.C. and Montreal — and it's continuing the trend of immersive pop culture pop-ups.   From sitcoms like "The Office" and "Friends" to sci-fi dramas like "Stranger Things," experts say pop-up shops are going to be "a permanent part of the retail landscape going forward," with media and entertainment pop-ups being the strongest new category in the industry.

The "Bridgerton" Experience is one of six different Netflix and Fever partnership experiences. It costs a pretty penny, $45-$85 for a 90-minute event. Past pop-ups like the Saved by the Max events in Chicago and Los Angeles made as much as $8 million over two years.

"Doing something that's kind of fun and lighthearted when people can like come out and get dressed up and just kind of forget about what's going on in the outside world for a few hours — it's like really nice," said one eventgoer named Danielle.

For fans, it's another escape and a way to jump into the world of their favorite series. And for studios like Netflix, it's a way to build up even more hype for their original programs, sell merchandise and leverage the growing fandoms around some of their most popular series.

Organized by Netflix, Fever and Shondaland, The "Bridgerton" Experience in Chicago saw a packed house when it opened this month, so it's likely more entertainment pop-ups will begin popping up around the country.