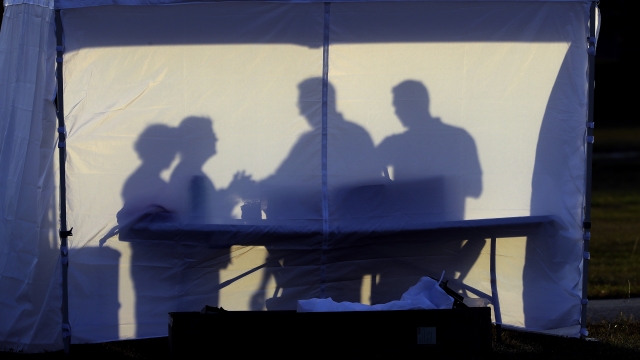 Among those in line for a COVID test over the holidays was Jennifer Stewart, who was feeling sick in Houston. She was one of many unable to find an appointment to get tested.

"Those appointments are booked out a week and a half in advance," she said. "Which, for most people, that's useless."

"The form I had filled out kind of looked like someone wrote it in Microsoft Word and didn't have any logos on it or anything," she said.

Stewart was desperate, so she went ahead and got swabbed.

"I was surprised that the testers weren't wearing any kind of protective clothing, which I thought was very strange," she said.

A small but growing number of Americans are filing complaints about COVID pop-up testing sites in peak demand as Omicron cases soar.

In Sarasota, Florida, police are warning about "possible suspicious activity at a COVID testing site."

In Chicago, there have been reports of "missing results" from pop up locations.

And in suburban Saint Louis, authorities tell Newsy they're looking into two testing spots that appear to have been unauthorized.

Newsy went through the Better Business Bureau's scam tracker and did find a handful of reports about suspicious COVID test sites. But they say the bigger issue right now is legitimate sites taking far longer than advertised to deliver results, meaning in some cases people are waiting days and days to know if they're infectious.

Claire Rosenzweig is the president and CEO of the BBB of Metropolitan New York.

She said: "Companies that might be established but are claiming that you're going to get your test results in a certain amount of time and lo and behold people are not getting them."

New York's attorney general is sending warning letters to several companies accusing them of misleading people about fast turn-around times when there are "wait times as long as eleven days."

"They're supposed to deliver on their promises," Rosenzweig said.

The Better Business Bureau recommends looking for COVID testing sites suggested by your doctor, or that are well reviewed online, will tell you the lab where your sample is going and who to contact if results take longer than promised.

In short, ask a bunch of questions.

"If they can't give you answers that give you a sense of comfort, walk away," Rosenzweig said. "There's going to be another test site somewhere."

As for Jennifer Stewart, the hospital name on the sign at her testing site, United Memorial Medical Center, never returned her calls or Newsy's calls.

After eight days, she finally got a result back — negative — but with wrong dates listed.

"Hopefully this can help someone else and they can know to be aware and to be careful," Stewart said.

Houston police say they've looked into reports of suspicious test sites in the city and found no evidence any are fraudulent.