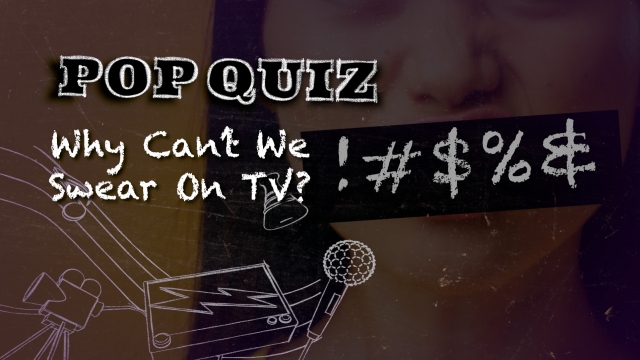 In this segment of "Pop Quiz," Newsy's "In The Loop" explores why certain words can't be said on air and how the rules evolve with language over time.

Dancing around risky language is common for many forms of on-air media. Sitcoms and family shows have been making substitutions like "sugar" and "fudge" for expletives and curse words for quite some time.

But why can't "swear words" be said on TV?

Newsy itself has a standards team that deals with that question daily.

Many of the rules that dictate people like Bienstock's decisions are based on the guidelines set by the Federal Communications Commission, known as the FCC. They're in charge of keeping "obscene, indecent and profane content from being broadcast" on public airwaves, meaning radio and broadcast television — specifically during the hours of 6 a.m. and 10 p.m., which is when kids may be nearby.

But, to be "obscene, indecent and profane" is less cut-and-dried than it might seem.

"The FCC themselves does not outline the specific words and say, 'This one's OK, and this one's not,'" Bienstock said. "Words like 'hell' or 'damn'; 'crap' is one that gets asked about a lot as well. What's interesting is a lot of this goes back to a stand-up comedy routine by the comedian George Carlin from 1972. It is famously referred to as 'The Seven Words You Can't Say On Television.'"

In this segment of 'Pop Quiz,' Newsy's 'In The Loop' dives into whether or not you can fall in love with a fictional character.

In the monologue, Carlin says, "Nobody gives you a list. That's the problem. They don't give you a list. Wouldn't you think it'd be normal that if they didn't want you to say something, they'll tell you what it is?" Then, he ends up saying those seven restricted words.

The original stand-up routine was eventually broadcast on public radio, to which angry listeners responded by filing complaints with the FCC. The issue eventually made its way to the U.S. Supreme Court.

The court ruled by a vote of five to four that the routine was "indecent but not obscene," but still subject to the jurisdiction of the FCC. That case created what is known as "The Carlin Warning," which does list which words are not allowed to be said on public airwaves, but even that is subject to change.

"Interestingly enough, there is one of those seven words that is now generally accepted, which is the phrase 'pissed off,'" Bienstock said. "It's used both as a replacement for urination but also as an exclamation of being angry."

That change is driven by the way language has evolved over time, whether it be online, in real life or even as a result of the pandemic.

"The development and where we go over time has to do with that benchmark for the common viewer," Bienstock said. "Words that we might have thought were grossly offensive 50, 60 or 70 years ago — even 20, 10 years ago — might not be considered in the same way now."

In this segment of "Pop Quiz," Newsy's "In The Loop" explores what a superhero battle would really look like in the U.S., from costs to clean up.

Some experts told the Wall Street Journal that it's similar to the way the pandemic has relaxed professional dress codes, brought colleagues into employees' personal spaces via virtual conferencing, and brought down what one expert called "artificial walls" — all of which have allowed a less-filtered language.

That evolved language carries through on TV.

A study this year found television catchphrases have more swears than ever. That trend started before the pandemic because of the rise of adult programming on cable, premium channels like HBO and streaming platforms like Netflix, which aren't governed by the rules of the FCC.

"With social media and internet and things like that, it's made it more relaxed in a sense," said Corderro McMurry, entertainment journalist at KRIS-TV. "We've blended those realms to say, 'Oh, it's OK. It's a swear word. We've all heard this word before.'"

Beyond catchphrases, swear words are also more common in literal show titles for dramas like AMC's "Kevin Can F**k Himself," Netflix's "The End of the F***ing World," and — though it isn't spelled like the swear word — the Emmy-award-winning sitcom "Schitt's Creek."

"On broadcast television, I feel as if the boundaries get pushed little by little, and you do start to see things, but sometimes, it kind of moves at a glacial pace," Bienstock said. "It's really going to come into if people become more comfortable with it in general society, then they're less likely to complain about it if they hear it on television. If they're less likely to complain about it, the FCC is less likely to enforce it. But honestly, I don't think that's going to happen anytime soon, at least not with that level of profanity."

So, while it's clear there's movement in that direction, it'll most likely be a while before the rest of George Carlin's "Seven Words" can be causally dropped on broadcast television.