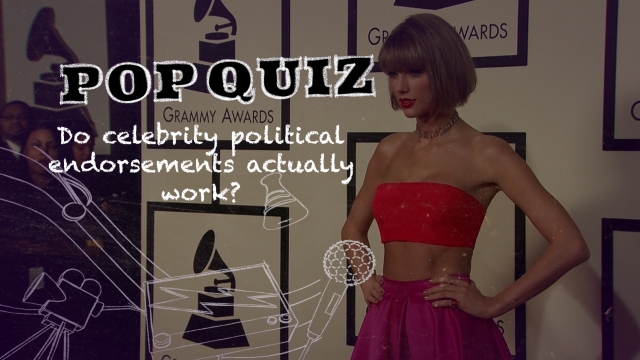 In this segment of "Pop Quiz," Newsy's "In The Loop" explores whether celebrity political endorsements actually sway or impact voter opinions.

There are many different ways celebrities have endorsed political candidates, but what is the impact or payoff of these endorsements?

A 2020 survey from Morning Consult and The Hollywood Reporter found 9 in 10 respondents said "no celebrity endorsement would sway their vote," but it calls into question how self-aware voters actually are about their own voting behavior and influences.

Political science professor David Jackson has been conducting research on the influence of celebrity endorsements for the past two decades.

"Some ideas I've been toying with on this is research related to what are called heuristics, or mental shortcuts that people take to come to a conclusion," Jackson said.

That idea of heuristics, or mental shortcuts, is important to understanding how voters vote. Figuring out the best candidate to vote for takes a lot of information-gathering, requires voters to examine their own values and really understand the needs of their community. All of that takes time, which is why voters find shortcuts through influential people and groups.

"That's the same kind of process that works when people decide to vote for a candidate because they're a Democrat or Republican, or because their union endorses them, or because an interest group endorses them," Jackson said. "There's nothing wrong with people taking these heuristics or shortcuts to answer questions that are easier than the questions asks and to get them to a conclusion that's in no way unreasonable."

Frank Sinatra was very vocally political — endorsing politicians like Franklin D. Roosevelt in the 40s, then John F. Kennedy in the 60s. Lyrics of Sinatra's 1959 hit single "High Hopes" were even changed to become John F. Kennedy's presidential campaign song. Back then, celebrity political endorsements were rare and seen as potentially harmful to careers, but Sinatra was big enough that he could get away with it.

Though both Roosevelt and Kennedy won the presidency, there were — of course — other factors in their wins, so it's not clear how influential Sinatra actually was. Plus, actual data about the influence of celebrity endorsements wouldn't really be around until decades later.

Then in 2008, Oprah Winfrey endorsed soon-to-be President Barack Obama. It was hugely notable at the time — not only because she's one of the most influential women in the world, but also because she hadn't endorsed politicians before.

However, just because a celebrity is popular doesn't mean they can turn the tide for a race.

It was the first time Swift really voiced her political opinions, and within roughly 24 hours, Vote.org found that nearly 65,000 Americans between the ages of 18 and 29 registered to vote — more than any other age group during that time. Tennessee specifically saw the highest number of registrations in just that week than any other month in 2018.

Despite that spike, which vote.org attributed directly to Swift, Bredesen still lost to Blackburn by a pretty heavy margin.

"A celebrity endorsement is a great thing," Jackson said. "It gives energy, enthusiasm, helps raise money, helps persuade people. But, it's a lot more complicated than that."

Jackson says the ideal celebrity endorsement centers around three things: how well known a person is, how likable they are and how credible they are.

"Does the celebrity seem to know what they're talking about? Do they seem to have any knowledge on the issues?" Jackson said. "In terms of credibility, we even saw in a research project I did recently that a celebrity who was kind of a cliche as being not particularly credible, Kim Kardashian, could actually influence her fans who like her and find her credible."

The Risky Deal With Celebrity-Brand Partnerships

Celebrities often make lots of money through corporate deals, but those partnerships can go wrong and get ugly.

Kim Kardashian is an interesting figure in the celebrity politics space because she is very well known, but she's also very divisive. Since Jackson's study, which came out in 2018, Kardashian has become more involved in criminal justice reform, including helping commute the life sentences of 17 federal prisoners.

To voters who don't find her likeable, her advocacy for the issue likely won't mean much. But to Kardashian's fans and followers, it may build up her credibility and make her more politically influential in the future. It also gives a massive platform to a serious issue in a way that most politicians can't.

Mark Harvey, the author of "Celebrity Influence" told The Washington Post in 2018," We can make fun of Kim Kardashian, but she's not Trump, and she's not Nancy Pelosi, and she's able to get something done."

Overall, the idea is that celebrity endorsements — like any other endorsement — can help voters make political decisions easier and more quickly, as long as they're likable and credible to fans. It's not certain that a celebrity has actually tilted races, but they can still help raise money, boost voter turnout and, most importantly, give a platform to the issues they care about.