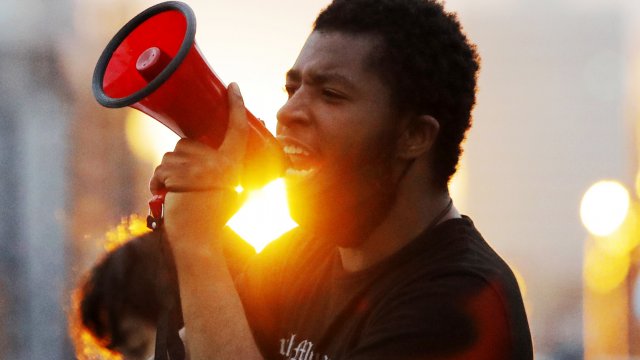 Fans' shift from inside jokes or comedic screengrabs to bail fundraisers and petitions shows how in-person protests have manifested online.

Celebrities like Tessa Thompson, Timothée Chalamet and Beyoncé are using their platforms to speak out against racial injustice.

Beyoncé: "There have been too many times that we've seen these violent killings and no consequences."

But beyond the direct actions and words of Hollywood stars, some of the internet's biggest unofficial fandom groups are using their own platforms to direct attention to the protest movements.

Though seemingly innocuous, online fan groups or "stan accounts" for musicians like Beyoncé and shows like "Brooklyn Nine-Nine" have upwards of 200,000 followers and heavily influence the entertainment industry.

Fans' sudden shifts from inside jokes or comedic screengrabs to bail fundraisers and petitions shows how the in-person protests have manifested online.

One of the biggest fandom groups in the U.S. is the "BTS Army" — dedicated to the South Korean pop group BTS. The fan account has more than half a million followers on Twitter, and it announced on Sunday that it is canceling its virtual spirit event to support the Black Lives Matter movement.

Beyond focusing attention on the protests, K-pop fans also spammed the iWatch Dallas app with concert videos. The app, which was used by the Dallas Police Department to identify "illegal activity from the protests," was shut down following the fans' "coordinated spamming efforts."