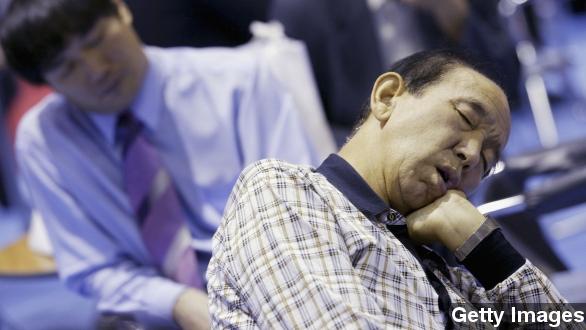 By Briana Koeneman
August 14, 2014
According to a new study, older adults who have trouble sleeping could be at a higher risk for suicide.
SHOW TRANSCRIPT

Older adults who have trouble sleeping might be at a higher risk of suicide — even when they don't show any other symptoms of depression.

In a new study published Wednesday in JAMA Psychiatry, people aged 65 and older who reported having sleeping difficulties were more 1.4 times more likely to commit suicide over the next ten years than those who reported sleeping soundly.

The Huffington Post notes that number was lowered to 1.2 when the researchers controlled for depression, but it's still a pretty significant figure.

The study's researchers say they included difficulty falling or staying asleep, waking up early in the morning, experiencing daytime drowsiness and not feeling fully rested in the morning as poor sleep.

The study's lead author said in a press release,

"This is important because sleep disturbances are highly treatable, yet arguably less stigmatizing than many other suicide risk factors."

To come to this conclusion, researchers studied more than 14,000 people aged 65 and older over the course of 10 years. During that time period, 20 died by suicide.

The research team compared the quality of sleep of those 20 people with the sleep patterns of 400 people similar to them in age, gender and location.

They found those participants who later committed suicide, on average, rated their sleep quality as poorer at the start of the study than that of the comparison group.

Several media outlets note these findings could provide doctors who treat patients with depression with another warning sign of suicide.

But the medical director of the Florida Sleep Institute told HealthDay he's skeptical about how well the study accounted for depression symptoms because they're so similar to those associated with poor sleep.

"We have to ask what's the cart and what's the horse because it's not common to be really sleep-deprived and then be wide-eyed and bushy-tailed and positive about things."

The research was published just days after news broke of famed comedian and actor Robin Williams' death, which authorities believe was a suicide.

The study's lead author told The Washington Post in a phone interview,

"It just shows that no one is immune to the risks of depression."

Researchers say they are now investigating why the link between poor sleep and suicide might exist.