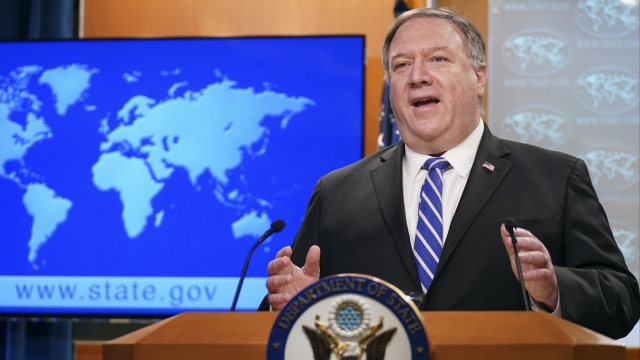 SMS
Ousted Watchdog Was Reportedly Probing Whether Pompeo Misused Staffers
By Bailey Vogt
By Bailey Vogt
May 18, 2020
Democrats say the firing of Steve Linick was designed to protect Secretary of State Mike Pompeo from a probe into misuse of taxpayer money.
SHOW TRANSCRIPT

Secretary of State Mike Pompeo's alleged use of staffers for personal errands was reportedly the focus of the State Department watchdog who President Donald Trump fired last week.

Former Inspector General Steve Linick was investigating whether Pompeo used publicly paid staffers for errands such as walking his dog, making dinner reservations and picking up his laundry, two congressional officials told NBC News. Linick may have also been looking into other claims that Pompeo was abusing taxpayer money.

President Trump said in a letter to Congress Friday he lost his "fullest confidence" in Linick but didn't provide details for this loss of trust. Trump adviser Peter Navarro on Sunday told ABC that the administration was having "tremendous problems" with what he called "the Deep State."

Linick's supporters note his record also includes investigating and criticizing Democrat Hillary Clinton in 2016 for her use of a private email server.

Linick is slated to leave office in mid-June and will be replaced by Ambassador Stephen Akard.