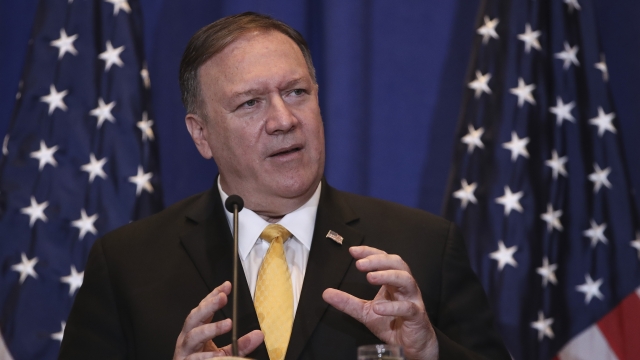 Secretary of State Mike Pompeo warned European countries to be careful about who they let in their 5G networks.

Secretary of State Mike Pompeo warned European countries in an op-ed for Politico Europe not to "trust Chinese firms with critical networks."

He urged leaders to "put security first with 5G" and was quick to call out Chinese tech giants Huawei and ZTE.

The U.S. has accused Huawei of stealing intellectual property. It blacklisted the company earlier this year, saying it believes Huawei poses a national security threat. Since then, Washington's been warning other countries to stay away from the firm. Huawei has denied the allegations.

He wrote: "With so much on the line, it's urgent that trustworthy companies build these 21st-century information arteries. Specifically, it's critical that European countries not give control of their critical infrastructure to Chinese tech giants like Huawei, or ZTE."

Pompeo warned the Chinese government could use Huawei or ZTE to "steal private or proprietary information or use 'kill switches'" to turn off electricity supplies.

Pompeo issued the warning ahead of a global technology conference in Brussels on Tuesday. On the list of things to discuss is the expansion of 5G infrastructure across the continent.

In a blog post Monday, Ericsson's CEO warned "Europe is in danger of falling behind in 5G."