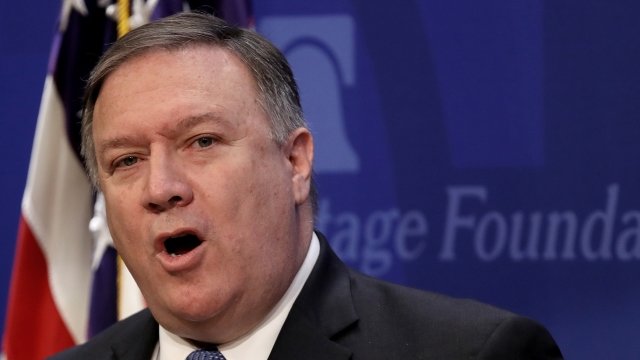 U.S. Secretary of State Mike Pompeo is calling for the Organization of American States to suspend Venezuela and slap more sanctions on the country.

"Suspend Venezuela from this body," Pompeo said. "That suspension is not a goal unto itself, but it would show that OAS backs up its words with action, and it would send a powerful signal to the Maduro regime — only real elections will allow your government to be included in the family of nations."

The OAS brings together all 35 independent states of the Americas. According to its website, the group's goal is to achieve "peace and justice" and to promote solidarity and collaboration among member states.

Vice President Mike Pence made a similar request Monday night during a reception for OAS members.

This comes after Venezuelan President Nicolás Maduro won a second six-year term in power in May in what some countries and U.S. lawmakers called a "sham" election. The U.S. announced new sanctions against Venezuela the day after the election.

On Monday, Pompeo told the OAS General Assembly that "There is no greater challenge today than the full-scale dismantling of democracy and the heartbreaking humanitarian disaster in Venezuela."

Maduro responded to the statements Monday. He said that Venezuela denounces the OAS and is leaving the organization.