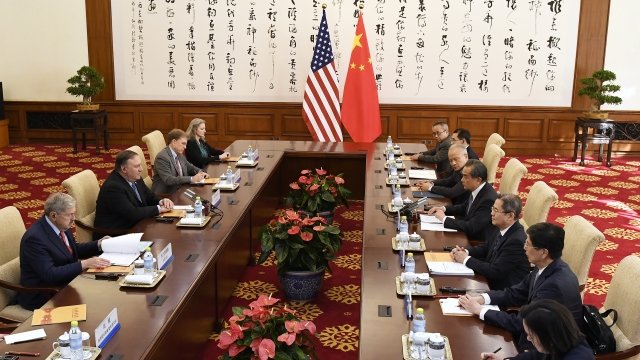 By Stephanie Liebergen
October 8, 2018
Secretary of State Mike Pompeo was uncharacteristically direct during his meeting with the Chinese foreign minister.
SHOW TRANSCRIPT

As Secretary of State Mike Pompeo wrapped up his trip to East Asia, he and his Chinese counterpart shared some uncharacteristically direct comments with each other.

"I did indeed want to come here to have discussions. The issues that you've characterized we have a fundamental disagreement. We have grave concerns about the actions that China has taken, and I look forward to having the opportunity to discuss each of those today," Pompeo said.

China's foreign minister said the Trump administration has been "casting a shadow" on their relationship and "ceaselessly elevating" trade tensions.

Diplomats usually avoid direct jabs during foreign meetings, but the relationship between China and the U.S. has been falling apart. The two nations are embroiled in a trade war, and at the United Nations, President Donald Trump accused the Chinese of election meddling — something Vice President Mike Pence emphasized in a recent speech.

The State Department's official readout of Pompeo's visit to China returned to the more expected diplomatic language. In describing Pompeo's meetings, it said, "The two sides affirmed the importance of a constructive, results-oriented bilateral relationship."