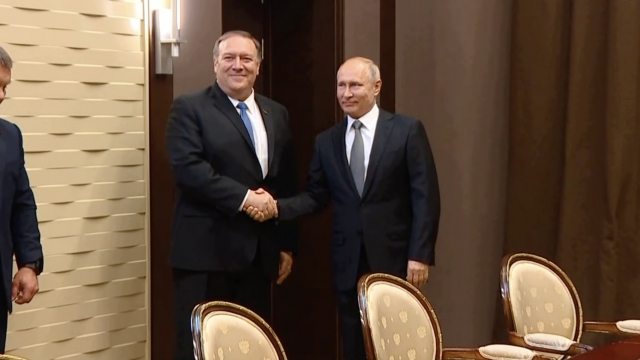 U.S. Secretary of State Mike Pompeo met with Russian President Vladimir Putin and Foreign Minister Sergey Lavrov in Sochi, Russia, on Tuesday. He was there to try to "improve" the U.S.' relationship with Russia and find some more common ground between the countries.

"I'm here today because President Trump is committed to improving this relationship," Pompeo said. "As I think you said, we have differences and each country will protect its interests, look out for its own people. But we are not adversaries on every issue, and I hope that we can find places where we have a set of overlapping interests and can truly begin to build out strong relationships, at least on those particular issues."

Pompeo said he and Lavrov talked about terrorism, Afghanistan and North Korea's nuclear program, and that they agreed on the importance of denuclearization. But one of the areas Pompeo said the countries disagree on is Venezuela. He urged Russia to end its support for President Nicolás Maduro so the Venezuelan people can "get their democracy back."

"The United States and more than 50 other nations agree that the time has come for Nicolás Maduro to go," Pompeo said. "He's brought nothing but misery to the Venezuelan people, and we hope that Russia's support for Maduro will end."

In response, Lavrov said Russia's siding with Maduro because "democracy cannot be done by force." He said U.S. officials' and Venezuelan opposition leader Juan Guaidó's actions and threats have "nothing in common with democracy."

They also talked about the threats from Iran. U.S. officials believe Iran may be planning attacks on U.S. interests in the Middle East, and the Pentagon has sent B-52 bombers to the area as a warning. Pompeo said the U.S. is not seeking a war with Iran, but that "if American interests are attacked, we will most certainly respond in an appropriation fashion."

This is Pompeo's first visit to Russia since the release of special counsel Robert Mueller's report on Russia and the 2016 presidential election. Pompeo said interference in U.S. elections is "unacceptable" and that the U.S. would not tolerate it happening again in 2020. Lavrov denied again that Russia interfered in any U.S. election.