Pompeo: US Considering 'Range Of Options' Against Iran 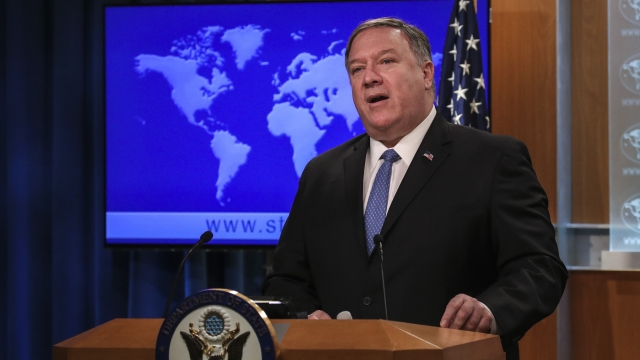 SMS
Pompeo: US Considering 'Range Of Options' Against Iran
By Katherine Biek
By Katherine Biek
June 17, 2019
The secretary of state's comments came after he blamed Iran for a "blatant assault" on two oil tankers in the Gulf of Oman on Thursday.
SHOW TRANSCRIPT

Secretary of State Mike Pompeo said the U.S. is weighing possible moves against Iran — including a  military strike.

Pompeo told CBS's "Face the Nation" on Sunday, "The United States is considering a full range of options. ... We are confident that we can take a set of actions that can restore deterrence which is our mission set."

When asked if military options were on the table, Pompeo said, "Of course."

Pompeo's comments came after he blamed Iran for a "blatant assault" on two oil tankers in the Gulf of Oman on Thursday. Iran has denied responsibility.

Tensions between the two countries have been simmering for a while. Back in April, the Trump administration announced it wasn't going to renew waivers that allowed countries to buy Iranian oil without facing U.S. sanctions.

Shortly after those waivers ended, Iran started rolling back some of its commitments under the 2015 Iran nuclear deal.

While speaking on "Fox News Sunday," Pompeo said the U.S. doesn't want to go to war with Iran. But he said the Trump administration is prepared to take action to "guarantee freedom of navigation" throughout the Strait of Hormuz.