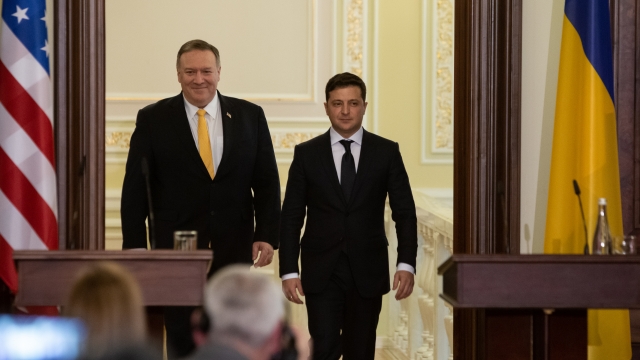 Secretary of State Mike Pompeo reassured Ukraine on Friday that the U.S. is committed to supporting the country in its conflict with Russia.

Russia invaded and annexed Crimea from Ukraine in 2014. Now it's backing separatists in the country in an armed conflict that has claimed more than 13,000 lives.

Pompeo's trip comes amid President Donald Trump's impeachment trial. The impeachment inquiry was largely spurred by accusations that the president abused his power by withholding military aid to pressure Ukraine to announce an investigation into former Vice President Joe Biden.

At a joint press conference with Ukranian President Volodymyr Zelenskyy, Pompeo pushed back against claims that Zelenskyy isn't allowed to visit Washington until he opens the investigation.

Pompeo said, "There's no condition of the nature that you described for President Zelensky to come to Washington and have that visit. It’s just simply not the case. We’ll find the right time ."