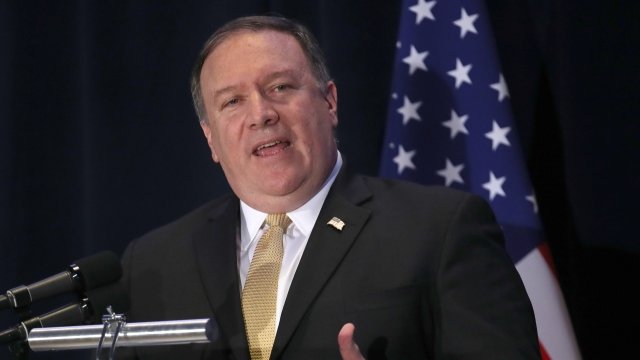 U.S. Secretary of State Mike Pompeo is hitting the road this week to sell other countries on the Singapore agreement reached by President Donald Trump and North Korean leader Kim Jong-un. Pompeo's probably going to get a lot of questions about Trump's pledge to freeze joint military drills with South Korea.

Trump said: "Under the circumstances that we're negotiating a very comprehensive, complete deal, I think it's inappropriate to be having war games."

The regular military exercises have been a constant irritant for North Korea, which views them as a provocation. Pompeo told reporters the exercises would be frozen as long as North Korea continues to negotiate in good faith.

South Korean President Moon Jae-in is likely to be supportive — he's been a big proponent of diplomatic engagement with North Korea and held his own groundbreaking summit with Kim back in April. 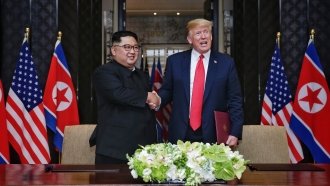 But Japan might need more convincing: The country relies heavily on U.S. military power for its own security. Any hint of a U.S. pullout in the region will prompt serious concerns in Japan.

After his meeting with South Korea and Japan, Pompeo is heading to China for what should be an easy sell. There's a lot for China to like from the Singapore summit.

China has advocated North Korea should denuclearize in gradual stages, with reciprocal steps from the U.S. And pausing military exercises is exactly the kind of reciprocal move China has pushed the U.S. to take in the past.

With tensions easing on the Korean peninsula, China's now considering relaxing economic sanctions on North Korea. Pompeo will likely try to persuade them to stick with the pressure.

When he gets back home, Pompeo's next task might be getting skeptical members of Congress on board. Before the summit, he told reporters the White House wants to give Congress a say on negotiations between the U.S. and North Korea.

Pompeo told reporters he expects to hold more meetings with North Korean officials soon. He says he hopes North Korea will take a major step toward nuclear disarmament by the end of Trump's first term in office.