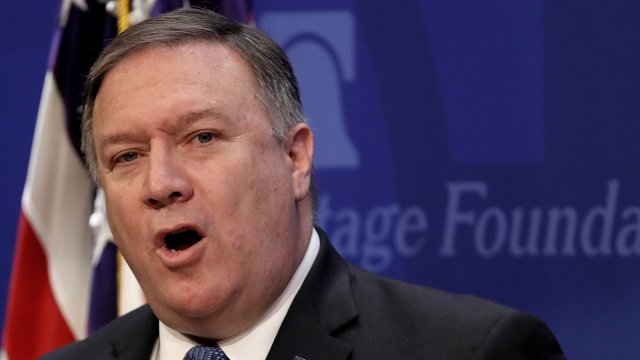 SMS
Pompeo Threatens Iran With 'Strongest Sanctions In History'
By Briana Koeneman
By Briana Koeneman
May 21, 2018
During a speech at The Heritage Foundation Monday, Secretary of State Mike Pompeo called for a stronger nuclear deal with Iran.
SHOW TRANSCRIPT

Secretary of State Mike Pompeo threatened to impose even tougher sanctions on Iran if the country doesn't make some major changes.

"The sting of sanctions will be painful if the regime does not change its course. These will indeed end up being the strongest sanctions in history when we are complete," Pompeo said.

During a speech at The Heritage Foundation Monday, Pompeo called for a stronger nuclear deal with Iran.

And he detailed a list of requirements the Trump administration believes should be included in the new agreement.

Among other demands, Pompeo said Iran must stop developing ballistic missiles, release all American hostages and withdraw all forces from Syria.

President Trump withdrew from the 2015 Iran nuclear deal earlier this month, saying the agreement is "defective at its core."