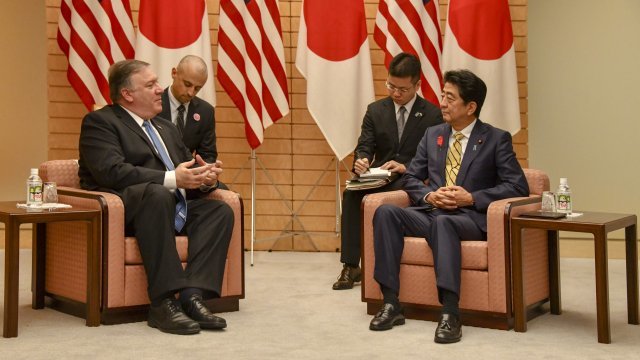 By Sebastián Martínez Valdivia
October 6, 2018
Pompeo will be in Japan Saturday and Sunday, before moving on to North Korea for a meeting with Kim Jong Un.
SHOW TRANSCRIPT

Secretary of State Mike Pompeo says being in sync with Japan is crucial when it comes to negotiations with North Korea.

Pompeo met with Japanese Prime Minister Shinzo Abe Saturday at the start of a three-day tour of East Asia.

Likely the most high profile stop on the tour will be in Pyongyang, where Pompeo is scheduled to meet with North Korean leader Kim Jong Un on Sunday. The Trump administration is reportedly looking to set up another summit between Kim and President Donald Trump.

President Trump has talked up his administration's dealings with North Korea, telling the UN last month, "we have already seen a number of encouraging measures that few could have imagined only a short time ago."

Abe and Pompeo's meeting comes at a time when South Korea's increasing diplomatic ties with Pyongyang have reportedly worried officials in Japan. Pompeo will close out his trip with a visit to China on Monday.