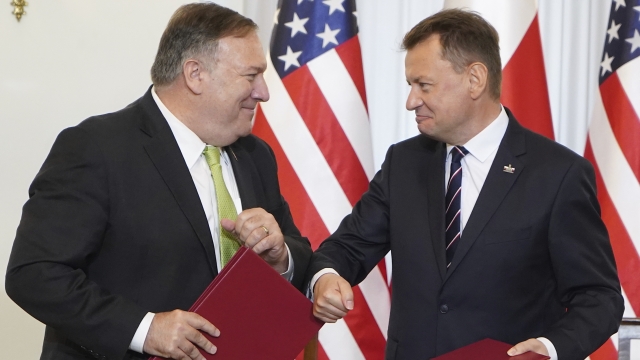 Secretary of State Mike Pompeo signed a new defense agreement with Poland Saturday. It was the final leg of Pompeo's trip to Central and Eastern Europe.

The Enhanced Defense Cooperation Agreement, which touts a growing relationship between the U.S. and Poland, is a legal framework that allows American forces to access more Polish military facilities.

It also relocates about 1,000 American troops currently in Germany to Poland. That'll bring the total U.S. troops in Poland to 5,500, but the Polish Defense Minister said the number could be increased to 20,000 if necessary.

This comes just weeks after President Trump decided to pull nearly 12,000 troops out of Germany after accusing the country of taking advantage of U.S. protection.

Foreign Policy magazine reports the president has repeatedly falsely accused Germany of being "delinquent" in paying NATO defense fees. Germany isn't behind on any payments. However it has fallen short of NATO goals for countries to commit 2 % of their GDP toward their own defense budgets.