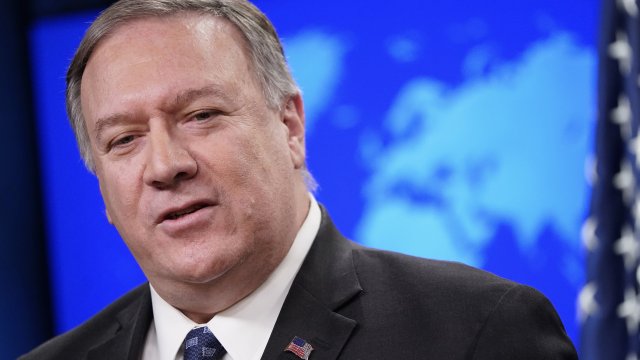 SMS
Pompeo Refuses To Elaborate On 'Imminent' Soleimani Threat
By Briana Koeneman
By Briana Koeneman
January 7, 2020
On Tuesday, Pompeo appeared to sidestep a reporter's request for proof of any looming threats leading up to last week's strike in Baghdad.
SHOW TRANSCRIPT

"There's been much made about this question of intelligence and imminence," Pompeo said.

Secretary of State Mike Pompeo once again refused to offer specific details about the "imminent" threat that prompted the U.S. to kill Iranian General Qasem Soleimani.

During a press briefing at the State Department Tuesday, Pompeo appeared to sidestep one reporter's request for proof of any looming threats leading up to the fatal airstrike in Baghdad.

"If you're looking for imminence, you needn't look no further than the days that led up to the strike that was taken against Soleimani. And then you, in addition to that, have what we could clearly see were continuing efforts on behalf of this terrorist to build out a network of campaign activities that were going to lead, potentially, to the death of many more Americans," Pompeo said.

There's been some skepticism surrounding the reasoning for the strike. Many critics have called on the Trump administration to paint a clear picture of the imminent threat that Soleimani posed. But the responses have been somewhat muddy.

"Soleimani was plotting imminent and sinister attacks on American diplomats and military personnel. But we caught him in the act and terminated him," President Donald Trump said.

"He was plotting to kill, to attack American facilities and diplomats, soldiers, sailors, airmen and marines were located at those facilities," National Security Adviser Robert O’Brien said.

"If you're an American in the region, days and weeks, this is not something that's relevant. We have to prepare. We have to be ready, and we took a bad guy off the battlefield. We made the right decision," Pompeo said.

But Pompeo said on Tuesday President Donald Trump is clear on one thing.

"Iran will not get a nuclear weapon, and as we came into office, Iran was on a pathway that had been provided by the nuclear deal, which clearly gave them the opportunity to have those nuclear weapons. We won't let that happen," Pompeo said.