Pompeo: 'Real Progress' Being Made On Possible Trump-Kim Summit 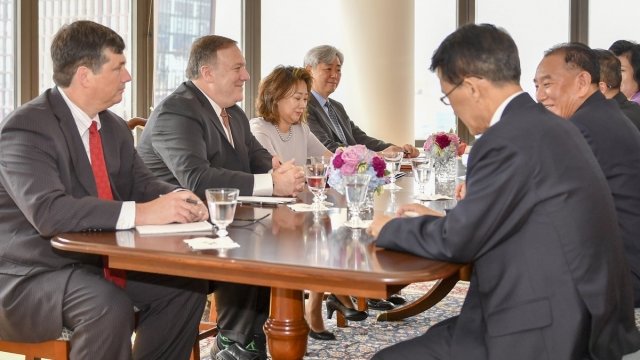 Secretary of State Mike Pompeo said he was very clear that the U.S. wants to see complete denuclearization.

Office of the U.S. Secretary of State

The U.S. has multiple teams around the world trying to finalize plans for a summit between President Donald Trump and North Korean leader Kim Jong-un. And it seems like the ball is in North Korea's court.

Secretary of State Mike Pompeo met with North Korea's Kim Yong-chol on Thursday in New York, and he said they've made "real progress" on the proposed summit.

Pompeo said he was very clear that the U.S. wants to see "complete, verifiable and irreversible denuclearization of the Korean peninsula." And it's up to North Korea to decide if that's something it can agree to.

Up next, Kim Yong-chol will be in Washington, D.C., on Friday to deliver a letter to Trump from the North Korean leader.