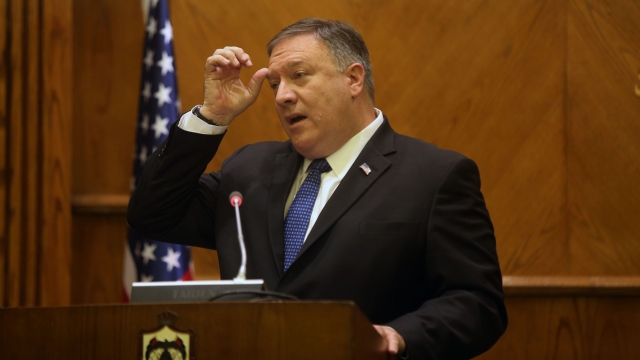 SMS
Pompeo Meets With Saudi Crown Prince In Riyadh
By Katherine Biek
By Katherine Biek
January 14, 2019
It's still unclear if the two discussed the death of journalist Jamal Khashoggi, who died back in October inside the Saudi consulate in Instanbul.
SHOW TRANSCRIPT

According to the U.S. embassy in Riyadh, Pompeo and the crown prince agreed on the "need for continued de-escalation" in Yemen, where the Saudi-backed government forces and Iran-backed Houthi rebels have been at war for nearly four years.

Following U.N.-sponsored peace talks in Sweden, the two sides recently agreed on a cease-fire in the city and port of Hodeida, an important conduit of supplies for the country's population.

The U.S. military has been lending support to the Saudi-led coalition. But the Senate passed a resolution last month calling for the president to remove American forces from Yemen.

Prior to Monday's sit-down, Pompeo pledged to talk to Crown Prince Mohammed  about the murder of journalist Jamal Khashoggi.

Khashoggi was a known critic of Saudi leadership. And U.S. lawmakers have concluded the crown prince is responsible for the Washington Post columnist's death. The Saudi government's denied those accusations.

As of early Monday morning, it hasn't been made clear if Pompeo and the crown prince discussed the matter. Pompeo's visit to Saudi Arabia is part of his tour of the Middle East, which included stops in Jordan, Egypt and Iraq. His final stop will be Oman before he heads home to attend a family funeral.