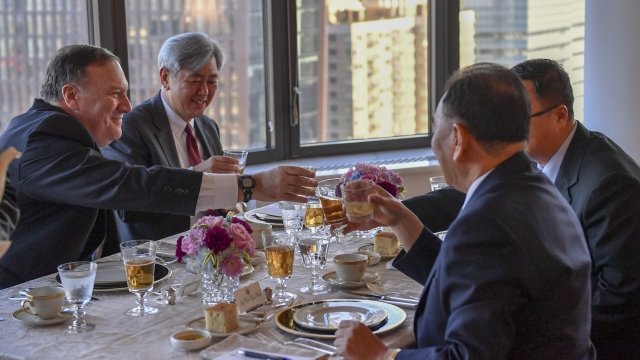 Secretary of State Mike Pompeo has another round of meetings scheduled for Thursday with the highest-ranking North Korean official to visit the U.S. in almost 20 years.

Kim Yong-chol is a former intelligence official and now holds several high-level political and military titles in North Korea. He arrived in the U.S. on Wednesday and dined with Pompeo that evening.

The dinner came as both sides are trying to salvage the summit between President Donald Trump and North Korean leader Kim Jong-un.

Plans for the highly anticipated meeting almost fell apart last week after Trump said he was canceling it because of what he called Kim Jong-un's "tremendous anger and open hostility."

Prior to Wednesday's dinner, Pompeo tweeted that the U.S. was still "committed to the complete, verifiable, and irreversible denuclearization of the Korean Peninsula."

Wednesday's dinner was the third meeting between Pompeo and Kim Yong-chol — but the first on U.S. soil. It lasted for roughly 90 minutes, and Pompeo later described it as a "good working dinner."