Pompeo Makes Surprise Trip To Iraq Amid Tensions With Iran 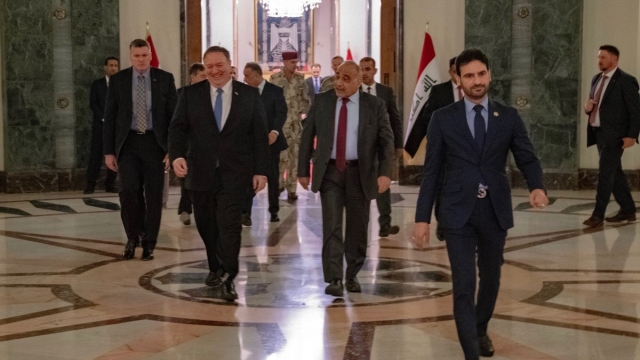 SMS
Pompeo Makes Surprise Trip To Iraq Amid Tensions With Iran
By Katie Cammarata
By Katie Cammarata
May 8, 2019
Pompeo said he met with the country's leaders "to reinforce our friendship" and "underline the need for Iraq to protect diplomatic facilities."
SHOW TRANSCRIPT

Secretary of State Mike Pompeo made an unplanned, brief trip to Iraq amid increasing tensions with Iran.

Pompeo said in a tweet that he met with Iraq's prime minister and president "to reinforce our friendship and to underline the need for Iraq to protect diplomatic facilities and Coalition personnel."

On Tuesday, the secretary of state abruptly canceled a trip to Berlin to meet with Chancellor Angela Merkel in favor of the meeting in Iraq. At the time, the State Department said the Germany trip was canceled "due to pressing issues."

There's a lot going on with U.S.-Iran relations right now. National security adviser John Bolton announced Sunday that the U.S. is deploying an aircraft carrier strike group and bombers to the Middle East in response to "troubling and escalatory indications and warnings" from Iran. In a short statement, Bolton said the deployment would "send a clear and unmistakable message to the Iranian regime that any attack on United States interests or on those of our allies will be met with unrelenting force."

Iran said the U.S. was engaging in "psychological warfare" by deploying the USS Abraham Lincoln.

Then, on Wednesday, Iranian President Hassan Rouhani said the country would stop complying with parts of the Iran nuclear deal.

During his meeting in Baghdad, Pompeo told the country's leaders that Iraq needed to protect U.S. troops and citizens there. Pompeo told reporters after the talks that the two leaders "provided assurances that they understood that this was their responsibility."

Pompeo also said: "They understand, too, it's important for their country. We don't want anyone interfering in their country, certainly not by attacking another nation inside of Iraq. And there was complete agreement across that."