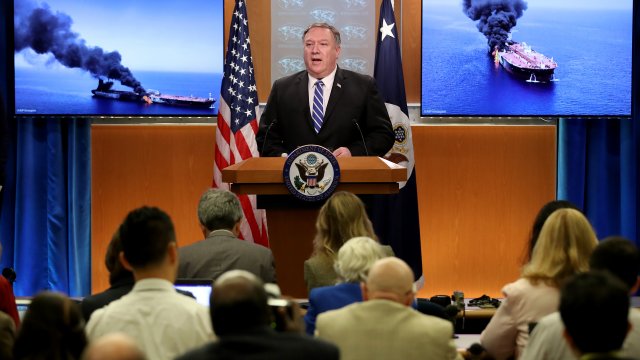 He said in a press conference, "This assessment is based on intelligence, the weapons used, the level of expertise needed to execute the operation, recent similar Iranian attacks on shipping and the fact that no proxy group operating in the area has the recourses and proficiency to act with such a high degree of sophistication."

Early Thursday morning, two oil tankers, one Norwegian-owned and the other Japanese-owned, were evacuated after they were attacked in the Gulf of Oman off the coast of Iran.

The attacks led to a surge in global oil prices, and they came just hours before Japanese Prime Minister Abe Shinzo was set to meet with Iran's supreme leader to discuss the U.S.-Iran standoff. Pompeo says Iran "rejected" Abe's request to mediate negotiations between the U.S. and Iran.

Pompeo says the U.S. wants to negotiate a comprehensive deal with Iran "that addresses the broad range of threats." He's asked the for the attacks to be brought up during a U.N. Security Council meeting Thursday.

"Iran should meet diplomacy with diplomacy, not with terror, bloodshed and extortion," he said.