Pompeo In Saudi Arabia To Meet With Officials About Khashoggi 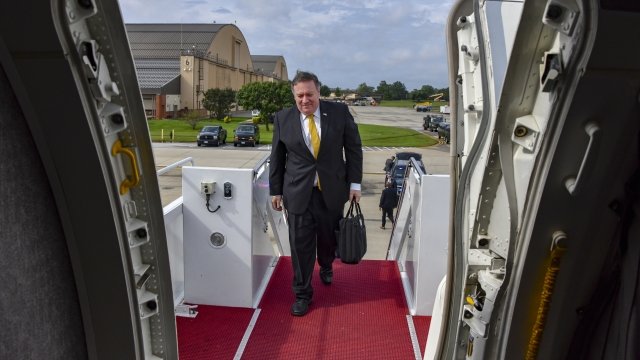 SMS
Pompeo In Saudi Arabia To Meet With Officials About Khashoggi

Secretary of State Mike Pompeo is in Saudi Arabia Tuesday to meet with King Salman and other Saudi officials about missing journalist Jamal Khashoggi.

The Washington Post columnist was last seen entering the Saudi consulate in Istanbul on Oct. 2.

The Turkish government claims it has proof that Khashoggi was killed inside the building, but Saudi Arabia has denied the allegations and said he left the consulate the same day he went in.

But CNN cited unnamed sources on Monday who said the government of Saudi Arabia is getting ready to admit that Khashoggi died during a botched interrogation. The questioning was reportedly meant to lead to his kidnapping from Turkey.

After he finishes up his meetings in Saudi Arabia, Pompeo will travel to Turkey where authorities are also looking into what happened. Investigators reportedly spent eight hours searching inside the Saudi consulate Monday. A Turkish official told the Associated Press that those investigators found "certain evidence" that supports their theory that Khashoggi was killed inside the consulate.