Pompeo Says House Requests Are An 'Attempt to Intimidate, Bully' 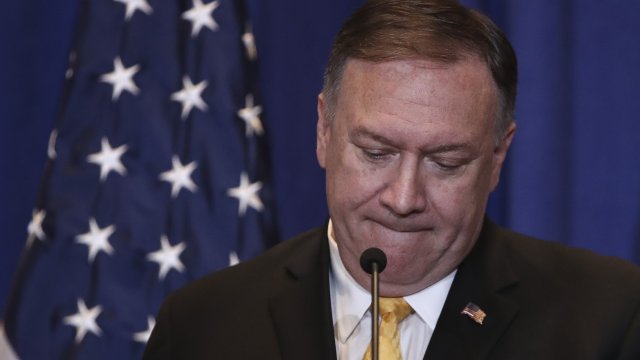 Some of those closest to the president look poised to ignore much of House Democrats' demands as they continue their impeachment inquiry.

President Trump's personal attorney, Rudy Giuliani, responded to House Democrats' subpoena via Twitter, saying in part that the Democratic chairs "have prejudged this case" and he is concerned about the legitimacy of the requests.

Guiliani did say he would give the request "appropriate consideration," and in an interview Monday night says he's still unsure if he'd sit before a committee, suggesting he has some sort of recordings he'd want to bring with him.

Secretary of State Mike Pompeo, on the other hand, is attempting to  shut down any part of the House Foreign Affairs Committee request to depose current and former State Department officials. In the letter, Pompeo said the request is "an attempt to intimidate, bully" and treat State Department officials "improperly." The secretary also accused committee staffers of failing to follow legal and procedural norms and merely issuing requests to appear, not binding subpoenas. This as Pompeo faces new scrutiny after several outlets reported he was on a now-infamous call with the Ukrainian president after he appeared to  have no knowledge of it.

This is nothing new. Former administration and campaign officials have either refused to testify for House committees or stonewalled during hearings.

Now, the president is looking to learn more about, maybe even identify, the whistleblower who sounded the alarm about this call and others and alleged a cover-up.

Influential Republican senator and former Judiciary Chairman Chuck Grassley said the whistleblower "ought to be heard out and protected. We should always work to respect whistleblowers' requests for confidentiality."

All this, as the intelligence community's inspector general says the president's claims that the whistleblower rules were changed just before the report was submitted are wrong. The rules have been the same since May 2018.