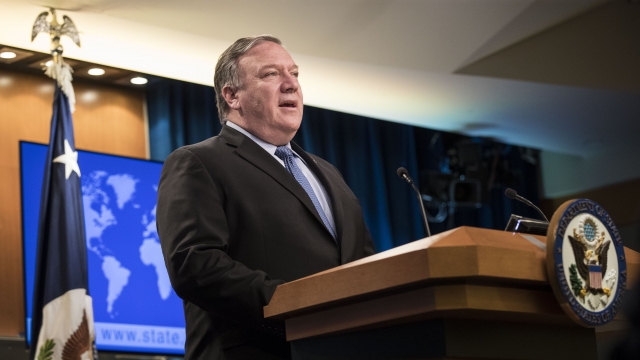 SMS
Pompeo Expresses U.S.'s Disappointment In Turkey Missile System Deal
By Alec Larson
By Alec Larson
July 21, 2019
​Pompeo spoke to Turkey's foreign minister over the phone Saturday, expressing concern over the acquisition as well as a number of other topics.
SHOW TRANSCRIPT

On Saturday, Secretary of State Mike Pompeo expressed disappointment to Turkey's foreign minister over its decision to complete the purchase of a Russian missile system, despite warnings from the U.S.

According to the State Department, Pompeo spoke to Mevlut Cavusoglu over the phone, expressing concern over the defense acquisition as well as the security of the Turkish border with Syria.

The U.S. has been upset with Turkey over the Russian S-400 air defense system because it believes the system could potentially collect information about the U.S.'s F-35 jets. On Wednesday, the U.S. removed Turkey from its fighter jet program. President Donald Trump also contemplated placing sanctions on the country.

On Thursday, a spokesman for Turkey's president responded with unease over the decision in a conversation with National Security Adviser John Bolton.