Polls Will Make Twitter More Interesting: Yes Or No? 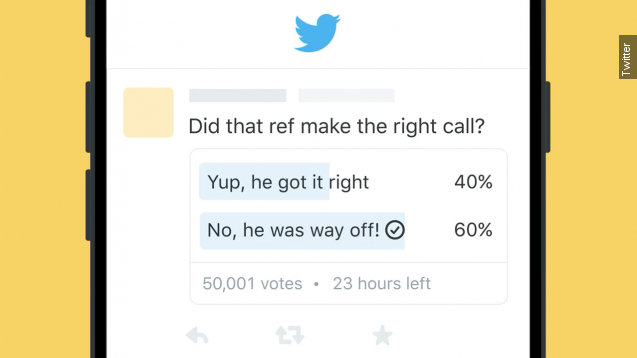 SMS
Polls Will Make Twitter More Interesting: Yes Or No?
By Mikah Sargent
By Mikah Sargent
October 21, 2015
Twitter introduced Polls, a two-choice voting feature that's rolling out to users over the next few days.
SHOW TRANSCRIPT

Back in my day, we used to have to ask our Twitter followers to retweet or favorite our tweets when we wanted an opinion on something: Is my "back in my day" joke funny? RT for yes; fave for no.

But Twitter's rolling out a new feature that will make it far simpler to get the opinions of your venerable followers: Twitter Polls.

Compose a question in the Twitter app on iOS and Android — or on the Web — and you should see a little blue pie chart. Tapping that pie chart lets you craft a two-choice poll.

If you see a poll you want to vote on, just tap your selection. No worries — your vote is private. Twitter says polls remain live for 24 hours, and at the end of the voting period, you'll get a notification so you can see the results.

If you're not seeing the option to set up a poll, fret not. Twitter says the new feature will appear on its apps and the Web over the next few days.

This video includes images from Getty Images and Twitter.