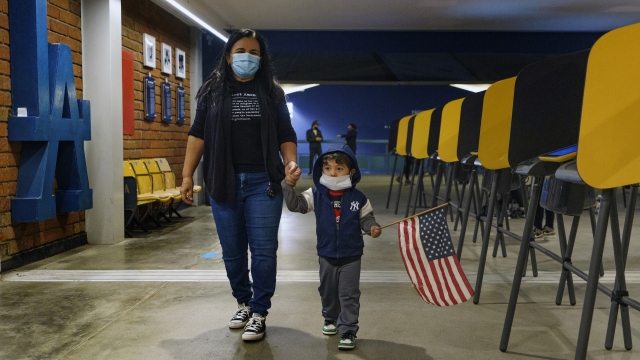 SMS
Polls Open As Candidates Make Final Pitches
By Simon Kaufman
By Simon Kaufman
November 3, 2020
With more than 97 million ballots already in, the president and Joe Biden still spent all of Monday making one last pitch to get your vote.
SHOW TRANSCRIPT

More than 97 million voters cast their ballots before today.

Some perspective: that's more than two-thirds of the total number of votes from 2016.

Of those early votes, more than 60 million were cast by mail.

With all of these ballots already in, the president and Joe Biden still spent all of Monday making one last pitch to get your vote.

And as you can see, it was a busy final day for both campaigns.

"My message is simple. The power to change this country is in your hands. And I don't care how hard Donald trump tries. There's nothing, nothing he can do to stop the people, this nation from voting, no matter how he tries."

That was Biden talking to voters in Pittsburgh.

The president ended his night in Michigan.

The president is scheduled to spend the morning at a campaign office in Virginia.

There aren't any confirmed details for where he will be Tuesday night.

The Biden campaign is scheduled to make a few final campaign stops Tuesday.

Joe Biden will campaign in Pennsylvania. His wife, Jill Biden, will visit Florida.

Running mate Kamala Harris will rally in Michigan and her husband will travel to Ohio.