Polls Confirm What You Already Knew: Trump's An Agent Of Change 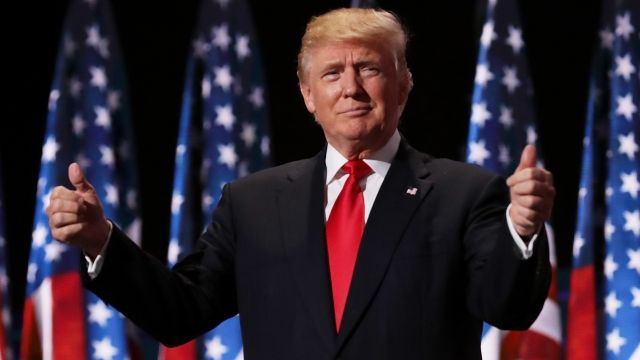 SMS
Polls Confirm What You Already Knew: Trump's An Agent Of Change
By Ethan Weston
By Ethan Weston
December 18, 2016
Polls show the U.S. is divided on whether the kind of changes Trump wants to make will be good or bad.
SHOW TRANSCRIPT

A new poll says a majority of Americans think that President-elect Donald Trump will bring change to the U.S., but they're divided over how good that change will be.

The Wall Street Journal/NBC News poll found that 68 percent of Americans think Trump can change how Washington conducts its business. But more than half of Americans polled think Trump will enact the wrong kind of change, or none at all.

Those numbers aren't too surprising. A CBS News poll released last week found that 53 percent of Americans are either concerned or scared about Trump's plans as president. The other 46 percent are optimistic about the president-elect.

Some of that worry appears to come from Trump's perceived relationship with Russia. Both polls mention many Americans are worried about how friendly Trump is with Russia and its president, Vladimir Putin.

That issue could continue to be a problem for the president-elect as the Senate begins confirming his Cabinet picks. Exxon Mobil CEO Rex Tillerson — Trump's choice for secretary of state — has connections to Putin and has argued against sanctions against Russia.

The Wall Street Journal/NBC News poll also found that a slim majority of Americans were troubled by recent reports from the FBI and the CIA that hackers with the Russian government attempted to interfere with the U.S. presidential election.

When you break the poll numbers down, it's all about the kinds of things Trump could change as president. Some hope he'll "make America great again," while others worry he could get the country involved in a war. Either way, most Americans tend to agree our president-elect is going to be an agent of change.