Polls: 49 Percent Back Trump's Removal, But Polarization Is Big Leader 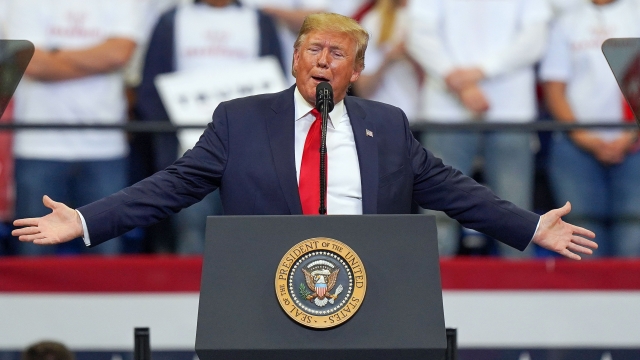 Nearly half of American voters, 49 percent, support President Trump's impeachment and removal from office. Some 46 percent in the same NBC/Wall Street Journal poll say "no way."

And that may speak to the real leader in a flurry of new polls on impeachment and the 2020 presidential election. It's polarization, by a landslide.

In fact, no president in the history of polling has triggered such divisive responses as the current occupant of the White House.

For starters, Republicans love Donald Trump, with Gallup polling averages showing 86% support over his time in office. Democrats can't stand him, with an average approval rating of just 7%.

Drill down and you find other divisions: The president is cheered in rural, mostly white communities facing economic uncertainty and displacement. He is jeered amid urban, racially diverse populations, in cities with booming service and technology industries.

And here's how that is shaking out in the potential presidential vote.

On one hand, the president trails in hypothetical match-ups with leading Democratic contenders. He's down by 9 points nationally in the NBC/Wall Street Journal poll to former Vice President Joe Biden and 8 points to Sen. Elizabeth Warren.

In 2016, Trump won the Electoral College vote, while losing the popular vote to Hillary Clinton by a 2% margin. So how have things changed among people who voted last time?

The answer is not much. Republican pollster Bill McInturff says, "We're not seeing a change at all in Trump’s standing." Democratic pollster Peter Hart says, "It's a very locked down electorate."

According to the Times-Siena poll, more than 90 percent of those who voted for President Trump in 2016 approve of his job performance. Hillary Clinton's voters disapprove, by similar numbers. The political needle appears unmoved.