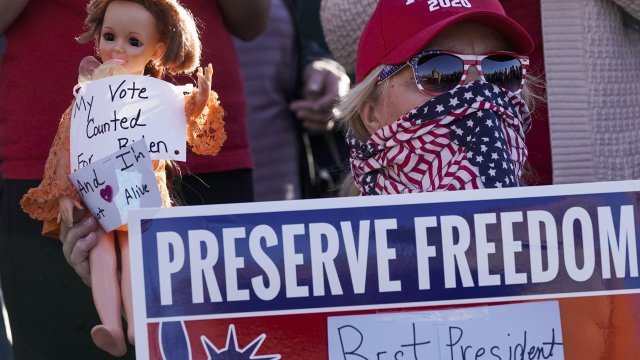 SMS
Trump Campaign Spends $3M On Partial Wisconsin Recount
By Newsy Staff
By Newsy Staff
November 18, 2020
Reuters-Ipsos poll shows more than half of all Americans say election was "legitimate and accurate," though 68% of Republicans think it was rigged.
SHOW TRANSCRIPT

The Trump campaign is shelling out $3 million dollars for a recount in two Wisconsin counties.

It chose the heavily-Democratic Milwaukee and Dane Counties — where the president lost by a combined 364,000 votes.

His attorney said both locations had the "worst irregularities."

The state has until December first to finish the recount.

It found 68 percent of Republicans think the election was rigged.

And those respondents were concerned vote counters tipped the results in Biden's favor.

The poll also found less trust in the election among adults overall.

55 percent of adults thought it was "legitimate and accurate" — down seven points from their poll after the 2016 election.