Convincing Republicans To Get Vaccine A Tough Task For GOP Leaders 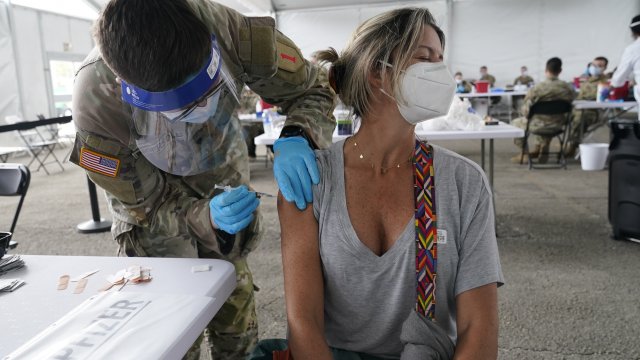 SMS
Convincing Republicans To Get Vaccine A Tough Task For GOP Leaders
By Alex Arger
By Alex Arger
March 14, 2021
Republican Gov. Asa Hutchinson of Arkansas said the reluctance by supporters of President Trump to get vaccine is "troubling."
SHOW TRANSCRIPT

There’s been frustration among many Americans trying to get vaccinated. Calling for appointments. Searching online. Waiting in lines. But not all Americans.

A new PBS/Marist poll shows nearly half of U.S. men who identify as Republicans said they have no plans to get the coronavirus vaccine. That’s frustrating to some Republican leaders.

"The poll numbers are troubling because in Arkansas, it's a very pro-Trump state in terms of the last election, and so we see that resistance whenever we are opening up eligibility for the vaccine," Gov. Asa Hutchinson said. "We're moving through it very quickly because we're not having everybody sign up to take it.”

Health experts are worried too.

"We've got to dissociate political persuasion from what's commonsense, no-brainer public health things," Dr. Anthony Fauci said. "The history of vaccinology has rescued us from smallpox, from polio, from measles. What is the problem here?"

Some believe the vaccines were developed too quickly. Some are worried the shots will make them sick. Some don’t trust the government and others see the vaccines through a political lens. Presidents and first ladies of both parties recently produced a public service announcement.

“In order for us to get rid of this pandemic, it’s important for our fellow citizens to get vaccinated."

Former President Trump did not take part with the other presidents, but Dr. Anthony Fauci told NBC's "Meet The Press" a strong and clear message from Trump could help sway some of his more resistant supporters.

Others say as more people get vaccinated with little to no side effects, more people will be swayed to take the shots — regardless of which political party they follow.

"Sometimes someone will not take the vaccine, saying, 'I just want to wait a little bit longer .... .' We're encouraging them not to do that," Hutchinson said. "When it's your turn, take the vaccine."