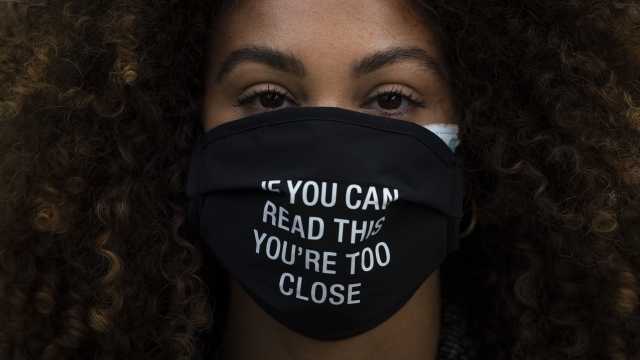 It’s something he didn’t see coming…

“I thought I had the flu until I got tested and obviously came back positive,” Jon Balfour said.

“I had a really dry cough, which scared me just because, like, it was like getting tougher to cough and breathe,” Balfour said.

He started noticing symptoms about a week after he had people over for Thanksgiving.

“You guys had people over, but you obviously had people get tested before they came over to your house. Were there any other measures that you guys took?”

“No, I mean, it’s the typical when you see family, you pretend like you're not going to hug and you’re like should we hug?," Balfour said. "And then obviously we ended up hugging and everyone just hangs out like normal once people are actually over."

Newsy teamed up with Ipsos and asked people how often they wear a mask around the different groups of people. The results: The closer the connection between people, the less likely it is they'll be wearing a mask. Respondents were much more likely to wear one around people in their community than those in their household and immediate family.

"As soon as you’re around friends and family, people forget about masks straight away I feel like."

For the first time, the CDC recommended universal face mask use in a report last week, which means wearing a mask indoors when not at home. Research suggests about 50% of transmission comes from people who are asymptomatic or showing no symptoms.

Dan Ariely, a psychology and behavioral economics professor at Duke University, says this is what people should do when it comes to others not following public health recommendations.

Balfour can't know for sure he got COVID from the Thanksgiving gathering. But now his wife is showing symptoms as well. Still… taking precautions around those we're close to can be tough.

"People forget about the masks and and just trust each other, which obviously we don't know where each other have been the whole week, what supermarkets and so on so," Balfour said. "I don't think it would ever happen. I think it's tough to enforce."