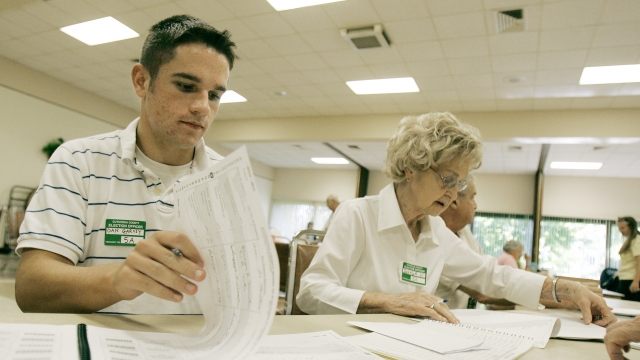 SMS
As Virus Drives Poll Worker Shortage, Teens Are Coming To The Rescue
By Shira Tarlo
By Shira Tarlo
September 16, 2020
Officials fear poll worker shortages could threaten an already complicated election. Teens hope to save the day by filling this gap.
SHOW TRANSCRIPT

In a normal election year, more than half the people working the polls are over 61. But in an election year beset by a global pandemic, new recruitment efforts are focusing on teens.

"I'm so frustrated looking at the state of our country but I'm also frustrated knowing that I won't be able to vote in November, so I'm hoping that by being a poll worker I can help some people vote even though I myself cannot," said high schooler Lucy Duckworth, a volunteer with the Poll Hero Project.

To combat potential staffing shortfalls, 19-year-old Kai Tsurumaki helped launch "The Poll Hero Project," focused on attracting high school and college students to take the place of veteran poll workers, many who are at higher risk for COVID-19 complications.

"I knew before going into this project that there was a lot of enthusiasm, a lot of activist energy among young people right now, but participating in this project and working to recruit poll workers has really, really underlined that for me and just shown me the full extent of that," Tsurumaki explained in an interview with Newsy.

Since its launch in late July, the nonpartisan group has recruited over 20,000 people to work the polls this November, most of them in their late teens.

"There is no number that we will reach where we'll say, 'That's it, we can pack it up, we've done a good enough job, we have enough poll workers,' because there's no number where we can be absolutely sure of that," said Tsurumaki. "We have to make sure that every polling station in the country has the people they need to be run."

Some states allow those as young as 16 to work the polls. Those interested can sign up on Poll Hero's website. The group then helps volunteers figure out if they're eligible and guides them through the process of applying to their local election board.

For those not yet old enough to vote, working the polls may feel like a way to participate in the democratic process—even without casting a ballot.

"People are really, really fired up to do everything they can to participate in the election, and even people who can't vote yet—16-17 year olds, who in their states might be eligible to work the polls—even they are really, really enthusiastic to work the polls," said Tsurumaki. "In fact, even more so in some cases because they can't vote yet so that's really their sole way to engage with the democratic process."

Staffing the polls has been a longtime challenge—think 12-hour days, minimal pay, lots of responsibility. It's become even harder amid the pandemic, with many older volunteers opting to stay at home.

And though a record number of Americans are expected to vote by mail this November, every state will still allow voters to cast their ballot in person if they choose—with election officials still looking for help for this November.