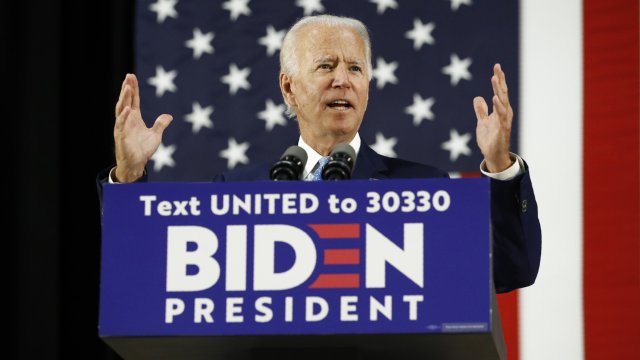 The unrest and outrage in recent months appears to be having an impact on what Americans think will happen this November.

A Newsy/Ipsos survey finds 42% of the country believes Democrat Joe Biden will win the presidential race -- slightly edging out the number who predict a second term for President Trump.

It's a notable shift from when we asked the question back in February during the heart of the Democratic primary race. Back then 45% of respondents said they believed the president would be reelected, and just over a quarter believed a Democrat would win.

Recent months have taken a toll on the president's standing among voters. His approval rating has sunk amid criticism of the federal government's response to the coronavirus, protests over racial inequality, and Democrats rallying around Biden as their nominee.

"I look at these numbers, I don't look at them just by themselves. I look at them with President Trump's approval rating, which we know has seen a slight decline," said Newall. "We see that Joe Biden has a double-digit, roughly 10-point lead in many public polls, including our own. to me what it signifies is Joe Biden has an edge when you look at it in terms of a number of different factors."

The survey also found a majority of Democrats and independents -- 54% -- say it is important for Biden to pick a woman of color as his running mate. It is particularly important to younger Americans -- who the former vice president struggled to appeal to in the Democratic primaries, and have been the driving force behind the nationwide protests.

A number of women of color are believed to be strong contenders as Biden narrows his list of potential picks.

Among them former Georgia gubernatorial candidate Stacey Abrams, who recently told Newsy "having a woman of color, having a black woman, at the top of the ticket with Joe Biden could be an incredibly strong and smart signal."

Biden's pick is expected to be revealed at the beginning of August, and his public comments suggest he is not looking for someone who will shake up the race.  But public opinion experts say plenty of other things can happen over the next four months.

"I think a lot remains to be seen in terms of how the American electorate feels and what is going to happen," said Newall.