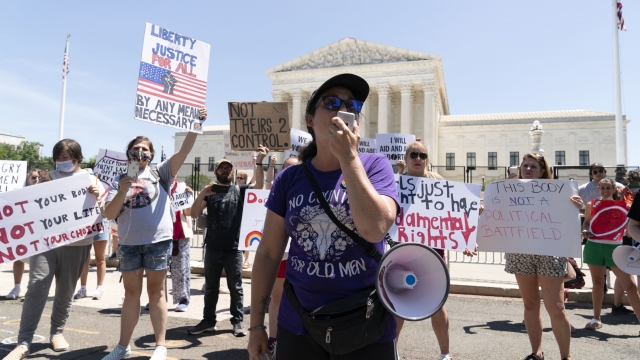 When the Supreme Court overturned Roe v. Wade, it sent a jolt through political campaigns across the country.

For politicians in the midst of their primary races, the opinion thrust the already-polarizing issue to the forefront of their campaigns. According to AdImpact, candidates spent $4 million on abortion-related ads in the week after the high court's decision.

Lucas Kunce is running for the Democratic Senate nomination in Missouri.

"What we want to do is just highlight how unjust this is, who this hurts, what communities it hurts, and make sure that that pain is real, like really acknowledged, so that we can try to move forward," said Kunce.

And Missouri Attorney General Eric Schimtt, who's running for the Republican Senate nomination, was the first to outlaw abortions after the Dobbs decision came down.

"I am humbled to be a part of this, and the first attorney general in the country to effectively end abortion," Schmitt said.

Kunce says he hears national Democrats talk about abortion bans as an election issue this fall. But he says this is something impacting voters right now.

In neighboring Kansas, the issue of abortion is literally on the ballot Aug. 2. Kansans will vote on whether to approve a new constitutional amendment to remove the state's guaranteed access to abortion.

Kyle Kondik from the University of Virginia's Center for Politics says the hot-button issue could also be an important topic in swing states, especially ones where old trigger laws were put into effect after Roe v. Wade was overturned.

"A couple states that come to mind are Michigan, Wisconsin and Arizona that have old laws on the books. And those states all have competitive governor's races this year, Senate races in Wisconsin, Arizona, you know, so those are states that are politically competitive and it's going to be important," said Kondik.

But he says it's too early to know how much of an impact abortion will have on Election Day.

"Roe v. Wade is one of the biggest developments we've had in American politics in quite some time. But at the end of the day, we have these things happen, and then they don't necessarily change the overall political dynamic," Kondik continued.

Abortion is the type of issue that often draws stark lines between Democratic and Republican politicians. But polling shows a majority of Americans are somewhere in the middle.

A recent Reuters/Ipsos poll found 61% of respondents said they'd be less likely to vote for a candidate who supports laws that ban or severely restrict abortion. But in a ranking of the most important issues, abortion ranks far behind others, like jobs and the economy.