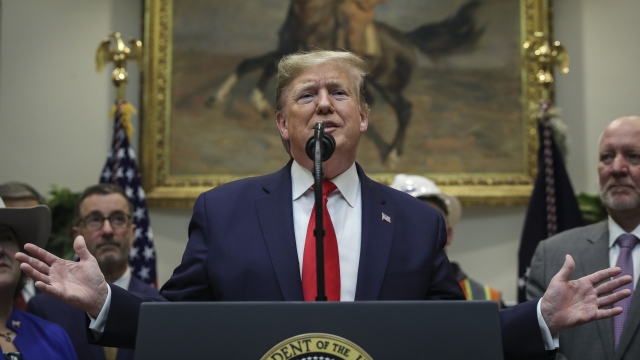 SMS
Who's Buying Social Media Impeachment Ads During The Trial?
By Tyler Adkisson
By Tyler Adkisson
January 24, 2020
Republicans aren't shy about mentioning impeachment in their ads — it's led to huge returns. Democrats haven't invoked it as heavily.
SHOW TRANSCRIPT

Since public impeachment hearings started, politicians have used them to raise huge amounts of money and support with social media ads. The first week of the Senate impeachment trial was no exception.

Many of these campaigns follow a formula set by President Donald Trump. Facebook's ad data shows that during the public parts of the impeachment process, Trump increases social media ad spending. Most of those ads have the same message: he says the impeachment is a "witch hunt" led by Trump's political opponents, and donations or voter information can help him fight it.

During the first week of the impeachment trial, Trump spent roughly $710,000 on Facebook ads. He outspent all but two other presidential candidates: Tom Steyer and Michael Bloomberg spent a respective $1.2 and $4.7 million on their own ads.

But Trump's ads are much more likely to mention impeachment than those of his Democratic challengers. Since Facebook started tabulating ad data in January 2019, Trump has run at least 29,000 Facebook ads with "impeach" or "impeachment" in the text. In that same time, the top 10 democratic spenders on Facebook have run about 13,000 of those ads — with Tom Steyer alone accounting for 12,000 of them. Some Democratic party leaders say the constant stream of impeachment news is carrying enough of that discussion already.

Outside the presidential race, Republican Senate Majority Leader Mitch McConnell ran ads that called impeachment a "junior varsity political hostage situation." He asked viewers to donate money to him to keep Democrats from flipping the Senate.

We've seen that when the ads work, they can pay for themselves, and then some. Back when the House announced impeachment hearings, the Trump campaign spent a combined $1.3 million on Facebook and Google advertising. It said that within three days it had raised $15 million in small-dollar donations.