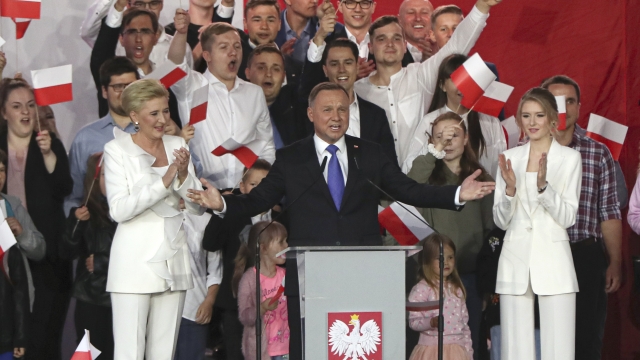 The country's National Electoral Commission announced Monday that Duda had received 51.21% of the vote, while his opponent Rafal Trzaskowski — who is the liberal mayor of Warsaw — got 48.79%.

In total, results from more than 99% of polling places had been counted at the time of the announcement. So the commission does not believe the votes that have yet to be counted will affect the election's outcome. Just over 68% of eligible voters reportedly participated in Sunday's presidential runoff election.

Duda, who is a conservative, is expected to help the ruling Law and Justice party make further reforms to the judiciary. That's something that's been widely criticized by the European Union. Duda is also expected to continue his push to limit abortion and LGBTQ rights.

But the opposition group that backed Trzaskowski said it's in the process of gathering details on alleged voting irregularities. At least some of those irregularities reportedly have to do with ballots cast by Polish citizens who live outside of the country.