Terrorists Might Be Why We Can't Get Rid Of Polio 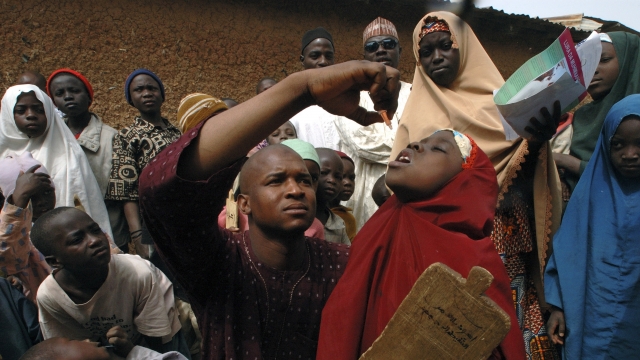 SMS
Terrorists Might Be Why We Can't Get Rid Of Polio
By Melissa Prax
By Melissa Prax
August 19, 2016
Polio recently resurfaced in Nigeria, and it's a sign of a bigger issue — that terrorists often target efforts that try to eradicate the disease.
SHOW TRANSCRIPT

Terrorists really don't like efforts to get rid of polio.

Take Nigeria for example. Two new cases of polio were reported in a country that hadn't seen it since 2014.

SEE MORE: Is The U.S. At Fault For Pakistan's Polio Outbreak?

Both were reported in the state of Borno, where Boko Haram is based and has reportedly blocked vaccination efforts in the past.

Now, the Nigerian government is putting about $29 million toward vaccinating children, but those vaccines might never reach the kids who need it most.

Polio is highly contagious and can have paralyzing effects in extreme cases. Most of the world has eradicated the disease.

Polio has also recently shown up in Afghanistan and Pakistan — areas with a terror presence. In those countries, terrorist groups have been known to block efforts to eradicate the disease.

Many have attributed the lack of trust in the polio vaccine to the U.S. In 2012, the CIA confirmed it used a fake vaccination team in its search for Osama bin Laden, leading to the ban of vaccination teams in some parts of Pakistan. But it took another year and a half for the CIA to issue an order ending the use of vaccination campaigns as a cover for espionage.

And it's not just ISIS. The Afghan Taliban has accused medical workers treating the disease of spying.

Afghanistan is starting vaccine efforts again after more than a year.

Pakistan's Taliban has also waged war on polio eradication efforts for years by killing medical workers or kidnapping those who support them.

In January, the Pakistan Taliban claimed responsibility for a bombing near a polio center that killed 14 people.

That bombing temporarily halted efforts to vaccinate and treat patients.

So for a disease the World Health Organization has said could be gone by next year, terrorism seems to be one of the biggest hurdles.