Police, US Consulate Hit In Attacks Across Turkey 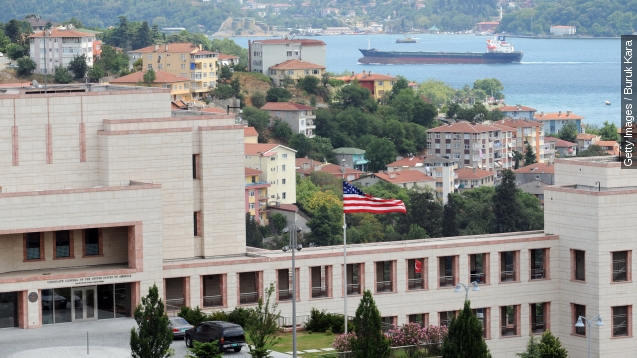 Turkey is reeling after a spate of attacks across the country left several people dead and shut down the U.S. Consulate in Istanbul.

Police at the consulate repelled attackers in Istanbul's Sariyer district without suffering any injuries. It's not clear who the attackers were or what their motivation was. (Video via CNN Türk)

The consulate has been attacked before. In 2008, three gunmen and three police officers were killed during a firefight there.

Elsewhere, the attacks were more severe, with a bomb blast killing four police in Sirnak province, bordering Northern Iraq. Gunmen also opened fire on a helicopter there, killing a soldier.

Northern Iraq is home to a large number of Kurds, and within Turkey, there have been several attacks from the Kurdistan Worker's Party, a Kurdish separatist group. (Video via VICE)

In a separate attack, a car bomb hit a police station in Sultanbeyli, a working-class suburb of Istanbul, injuring 10 people. A later attack at the same station left one officer dead, as well as two assailants. (Video via TRT)