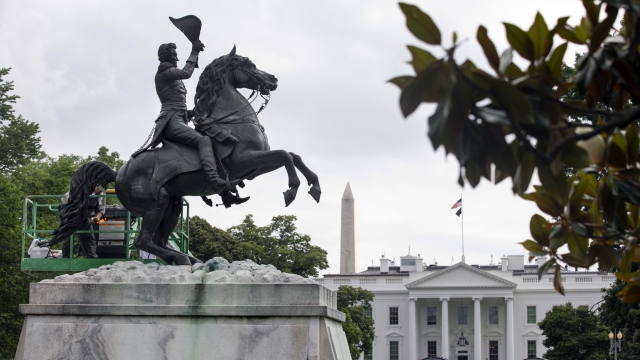 Hundreds of protesters in Washington, D.C., tried to pull down a statue of former President Andrew Jackson near the White House Monday evening.

Video shows some protesters had managed to climb the statue in Lafayette Square and tie ropes around it in an effort to pull it off its pedestal. The word "killer" was also spray painted along the base.

But efforts to topple the statue were ultimately unsuccessful after police officers intervened. Led by U.S. Park Police, the officers used pepper spray and batons to clear the area. The Washington Post reported some protesters clashed with police, throwing objects — including a folding chair — at the officers.

President Donald Trump later tweeted that "numerous people" had been arrested for what he called "disgraceful vandalism."

And Interior Secretary David Bernhardt, who was at the scene Monday, said, "Let me be clear: we will not bow to anarchists. Law and order will prevail, and justice will be served."

People demonstrating against racial inequality have called for the removal of statues of historical figures associated with racism. Jackson, who was a Tennessee slaveholder and general in the U.S. Army, signed the Indian Removal Act into law in 1830. It led to about 100,0000 Native Americans being relocated west of the Mississippi River. Thousands died along the way.