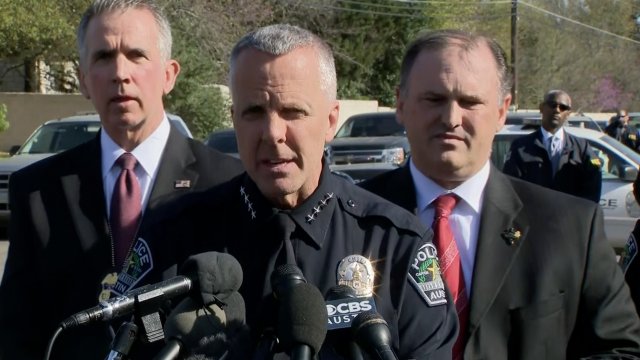 SMS
Police Say A 'Serial Bomber' Might've Set Off Explosions In Austin
By Briana Koeneman
By Briana Koeneman
March 19, 2018
Authorities say an explosion Sunday in an Austin, Texas, neighborhood had similarities to three previous blasts in the metro earlier this month.
SHOW TRANSCRIPT

Authorities say an explosion in an Austin, Texas, neighborhood Sunday has similarities to three previous blasts in the metro earlier this month.

"We're clearly dealing with what we expect to be a serial bomber at this point," Austin Police Chief Brian Manley said.

And he urged residents to contact police immediately if they see a suspicious object or any item that looks out of place.

Police say at least two people died and two others were injured after exploding packages showed up at their homes in recent days. But Manley says Sunday's package was different. It was left on the side of the road, and officials say a tripwire might've triggered it. The two victims were injured while either walking or riding bikes, and both are in good condition at the hospital.